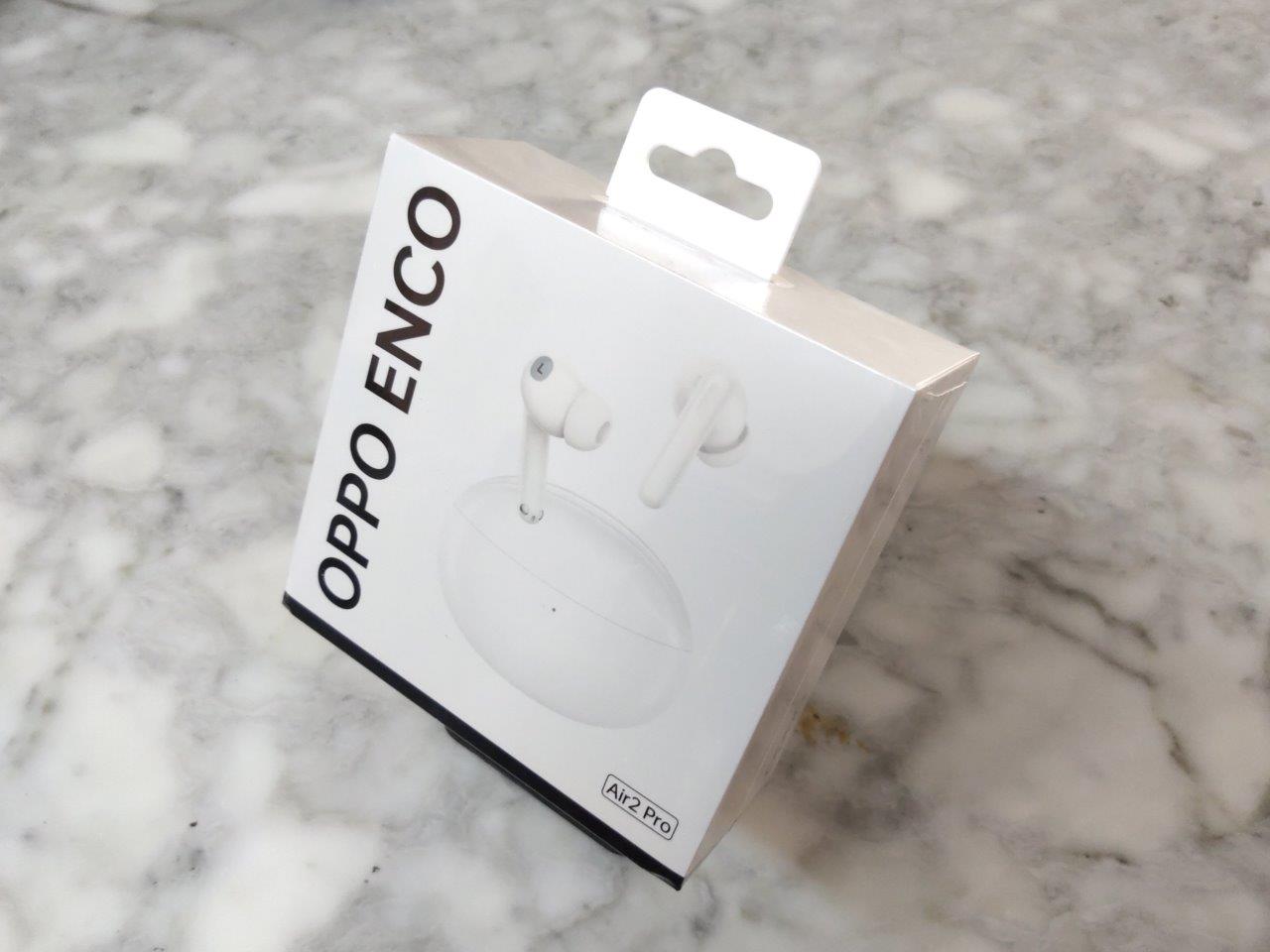 We’re back for another round of earbuds reviews! This round we’ll be looking at the OPPO ENCO Air2 Pro. We had covered the overall design in our last article, for those who are interested to have a read, you may find the article through this LINK.
So without further ado, let us dive deep into the functionality of OPPO ENCO Air2 Pro and see what it has to offer to the users.

The OPPO ENCO Air2 Pro ships in with a rather simplistic cardboard box, white in design with the title gracefully etched on the left side of the box followed by the overview display of the unit itself. The name of the unit and particularly the earbuds are laminated, giving it a glossy look that reflects lights from various angles. Whereas the rear side of the box is covered with a layer of the frosted surface, which also gives it a dim reflection of light when it’s exposed to light. Other than the listed specifications, the back of the box also displays the basic functionalities and features of the unit.
Unboxing the package you’ll find the following items fitted within :

The unit itself comes with a pair of Regular size silicon earbuds attached, but no extra, thus in case you lost the regular size earbuds, your best bet is to get them from a third-party shop. Overall the package is standard at its best, not too clunky nor extravagant.

So as per mentioned in the previous article, the Air2 Pro has a feather white layout with the cover panel being semi-frosted and translucent. The unit comes in an oval size and is relatively larger than its base unit, the OPPO ENCO Air 2, which has a more compact and roundish design. It has an easy grip and is able to slide into any pocket and hard earbud cases.

Once the case is opened, you’ll notice the earbud pair is situated vertically inside the charging dock. Since the pair of earbuds is built in a traditional “L” shape design. It is easier to grip and allows for easier adjustment on the ears to suit the position you desired.

Last but not least, the charging case is made out of matte plastic. It has a smooth and glossy surface that could satisfy anyone who has OCD out there. while the case has no problem with dust and fingerprint stains, it does however easily vulnerable to dirt. Just make sure to wipe if with dry tissue or wet wipes whenever you come back from an outing.

The OPPO ENCO Air2 Pro has a rather sustainable battery life. With the earbuds having of 43mAh battery installed, the earbuds could last up to 7 hours without ANC enabled, and up to 5 hours with ANC enabled on a single charge. Provided the volume is adjusted less than 50%, of course. PLacing it back into the charging case for 10-15 minutes or so would provide 2 hours of playback time, making it excellent for anyone who wanna have a quick music playback while riding on a long-distance public transit.

The charging case, on the other hand, has a 440mAh battery life, enabling a maximum of 25 hours of playback time on a single charge. Of course, as mentioned before, if you want to have an accurate indication of the battery level for both the case and the earbuds, your best choice is through the HeyMelody app, it will display in detail and percentage of both the case and earbuds.

The ENCO Air2 Pro has its own configuration by default, any customisations could be done through the MyMelody app. However, let’s have a look at the default settings :

Strangely, there’s no pause function when it comes to default tapping settings, so you’re left with 3 options, one being to pause music manually through your phone, second is to remove either side of your earbuds from your ears. Once you do, the music playback will stop and at the same time, any modes set beforehand will automatically revert back to normal hearing mode, allowing you to converse with others or listen to the environment in convenience until you place either side of the earbuds back into your ear. Lastly, the third option is to customise the tapping features through your MyMelody app in the earbuds controls settings. Be it a single tap, double taps, or triple taps on either side of the earbuds, it is up to you. Other than the normal play/pause, next/previous track options, you could also map the volume up or down features to your own likings through the app.

Like any “enhanced” version of earbuds and audiophiles, the ENCO Air2 Pro enhances the hearing experience pleasantly. The ENCO Air2 Pro has a 12.4mm dynamic driver, providing a more immersive base and sound quality. With the aid of MyMelody, users could switch on Enco Live Sound effect as well as Game mode in addition to the ANC and Transparency mode. Providing more flexible and dynamic combinations when it comes to sound effects and quality. But before we dive into those, let’s start off with the basic :

As this name suggests, this is the default mode you start off with the moment you fire up the earbuds. With the volume set up to the max, the earbuds could still project the sound with no staggers and any noticeable issues. While testing it with the song GUNJOU by Yoasobi, the distance that the sound projected is relatively intense when on max volume, proving that the earbuds have high decibels when it comes to sound projection. To put it simply, this mode is suitable for daily hearing while you’re going on with your tasks or study.

This is the charm of the OPPO ENCO Air2 Pro unit, while the ANC mode is on, it able to filter out most of the background noise to prevent any distraction. As proven by my experience on public transit (LRT). As we all know when the LRT starts to move, you’ll start to hear the friction sound going on in the train tracks. With the ANC mode, you could hear almost none of those distracting noises. Of course, utter complete silence is impossible, I could still hear the train station announcement inside the LRT while the ANC mode is still on. But overall, the ANC has done its part exceptionally. Moreover, this mode works well with heavy base songs such as Bad Guys by Billie Eilish.

My thoughts on transparency mode are mixed, while the mode is on, it works as it should but it felt like most of the sound filter through the transparency mode is not filtered to its best. As sometimes sound heard from the external environment felt like just a gust of wind blowing through the earbuds instead of just decent sounds. Even when I was conversing with my peers, most of the time the ratio of the wind-like droning sound is louder compared to the voice feedback from the person I was talking to, even at a lower volume. Nonetheless, this mode is still suitable for individuals who like to hide in a silent bookstore or library. If that’s the case, this mode will work just fine with any low-fi songs.

Now we have a basic idea of the three available modes, let us have a look at what other extra settings you could do with the aid of the MyMelody app and how well it pairs with the aforementioned mode.

If you don’t know by now, the OPPO ENCO Air2 Pro has a binaural low-latency feature, and this usually goes very well with mobile games and especially FPS games like Call of Duty Mobile as well with PUBG. There’s almost little to none when it comes to sound delay. had a couple of rounds on the Diablo Immortal game in conjunction with the ANC mode and it was spot-on immersive. But do bear in mind this may be a good combination, it would also drain your battery life way faster.

This is what OPPO ENCO Air2 Pro has to offer when it is paired with the MyMelody app. With 3 sound effects to choose from, you could customise to your heart’s content. There is the normal effect where it allows you to experience all the 3 modes at its base form; There’s the bass boast which honestly speaking, only enhances the bass effects by a small margin. But fairly speaking, you could still tell a significant enhancement when the earbuds are on normal mode. However, when it’s on ANC mode, the sound effect only enhances the bass by a slight but still distinguishable margin. Nevertheless, it’s a very tasteful touch, and I love it. Last but not least, there’s the clear voice effect. It’s [retty self-explanatory as this mode enhances the vocals of the tracks to allow a clearer projection. I also personally like this effect because it makes any tracks that are performed by choirs sound brilliantly splendid. Try listening to The Road Home by VOCES8 and I guarantee you won’t feel regret.

Phone call wise, for some reason there may be a 1 second or less delay when conversing. But it can be overlooked as the transmission of sound is still clear, of course, it is still dependable when on what phone models the opposition caller is using. If just so happen that the phone in use is a land phone or public phone (if you can still find one) then do expect lower audio volume and some other hiccups. Onto the WhatsApp voice messages, so far I do not experience any major problem with the earbuds, everything is smooth sailing unless the person who sent me the message has bad connectivity or firmware problems.

Now here’s a quick summary of the specs and hardware that is packed within the OPPO ENCO Air2 Pro :

Should you be worried about the rain? Not so as the ENCO Air2 Pro has water and dust resistance of IP54, as long as you don’t drop it in a pool.

My personal thoughts as the wireless earbuds hype are growing rapidly now, it’s safe to say picking the right earbuds that could deliver its quality at its finest is a must. Not to mention that the OPPO ENCO Air2 Pro is situated at an ideal price. This unit offers more than just basic functionality but also flexibility to a certain degree. Is it the best earbuds out there? dependable, but it is one of the most reliant out there, especially with a price tag of less than RM400. Therefore it is worth a buy.

Special Thanks to OPPO Malaysia for providing us the review unit.