Indulge Yourself With Joy and Laughter this Raya with VIVO’s Short Film ‘Chup! Raya Dulu!’ 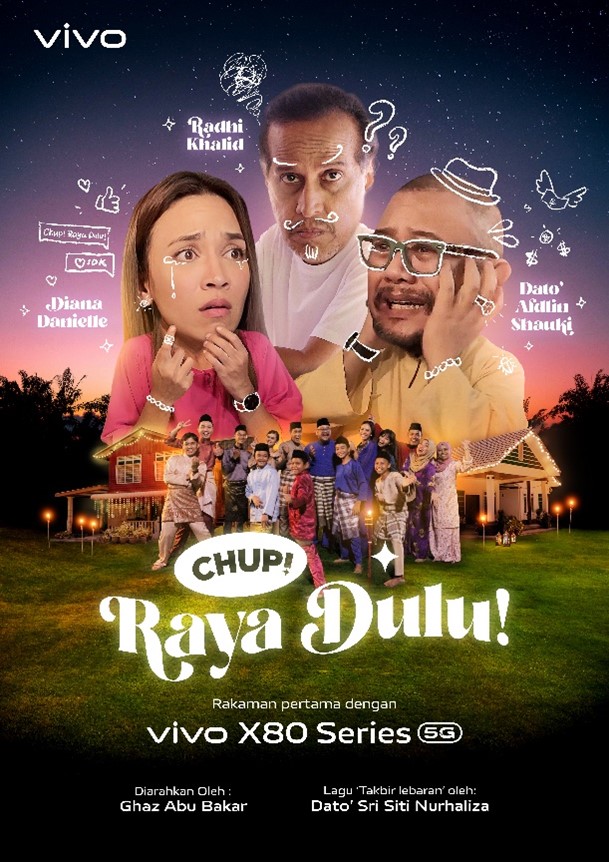 This Raya, VIVO Malaysia collaborated with Multimedia Production Film to create a short film named ‘Chup! Raya Dulu!’ depicts the narrative of a wealthy family’s struggle to become a part of the community during the Raya festival. The film was shot entirely on the new VIVO X80 Pro, a professional photography flagship smartphone with exceptional mobile imaging technology co-engineered with ZEISS.

You watched Kassim (played by Dato’ Afdlin Shauki), his wife Zaleha (played by Diana Danielle), and their son Kamil (played by Irfan) showing off their Raya vacation trips in the days before the outbreak, directed by Ghaz Abu Bakar. Unfortunately, Kassim’s business continued to suffer during the pandemic, deeming them unable to afford the trip to Switzerland; however, because he had boasted to his neighbors about the family’s plan to travel during the Raya, Kassim and his family decided to pretend to be on vacation while staying at home. This eventually caught up with everyone, and their lie was soon exposed.

Mike Xu, Chief Executive Officer of VIVO Malaysia said: “At VIVO, we believe in the strength of unity and humbleness. These very characteristics will take humanity to greater heights regardless of one’s status or background, which is why we are excited to be a part of this short film project because it brings positive values to this year’s meaningful Hari Raya celebration. The advanced imaging technology co-developed with ZEISS on the VIVO X80 Pro brings to life our slogan of ‘Cinematics, Redefined’, and has enhanced the short film and helped highlight the filming capabilities of the smartphone. The filming process on the VIVO X80 Pro has bridged the gap between a smartphone camera and professional filmography device.”

“Directing ‘Chup! Raya Dulu!’ was a fun experience for me. Each time I direct a film, I always try to capture the cinematic synergy of light and shadows and find the balance between the two. This is my cinematic language and I must say it was exciting to film using the VIVO X80 Pro as it has enabled me to aptly capture the light and shadows with great clarity. I hope that the film will bring joy, humour and a lesson of life to all Malaysians who watch it, and I sincerely wish for them enjoy the short film as I did directing it,” said Ghaz Abu Bakar, Director of ‘Chup! Raya Dulu!’.

The ‘Chup! Raya Dulu!’ short film will be released on VIVO Malaysia’s official YouTube channel beginning 1 May 2022. You may catch the trailer of the film here.