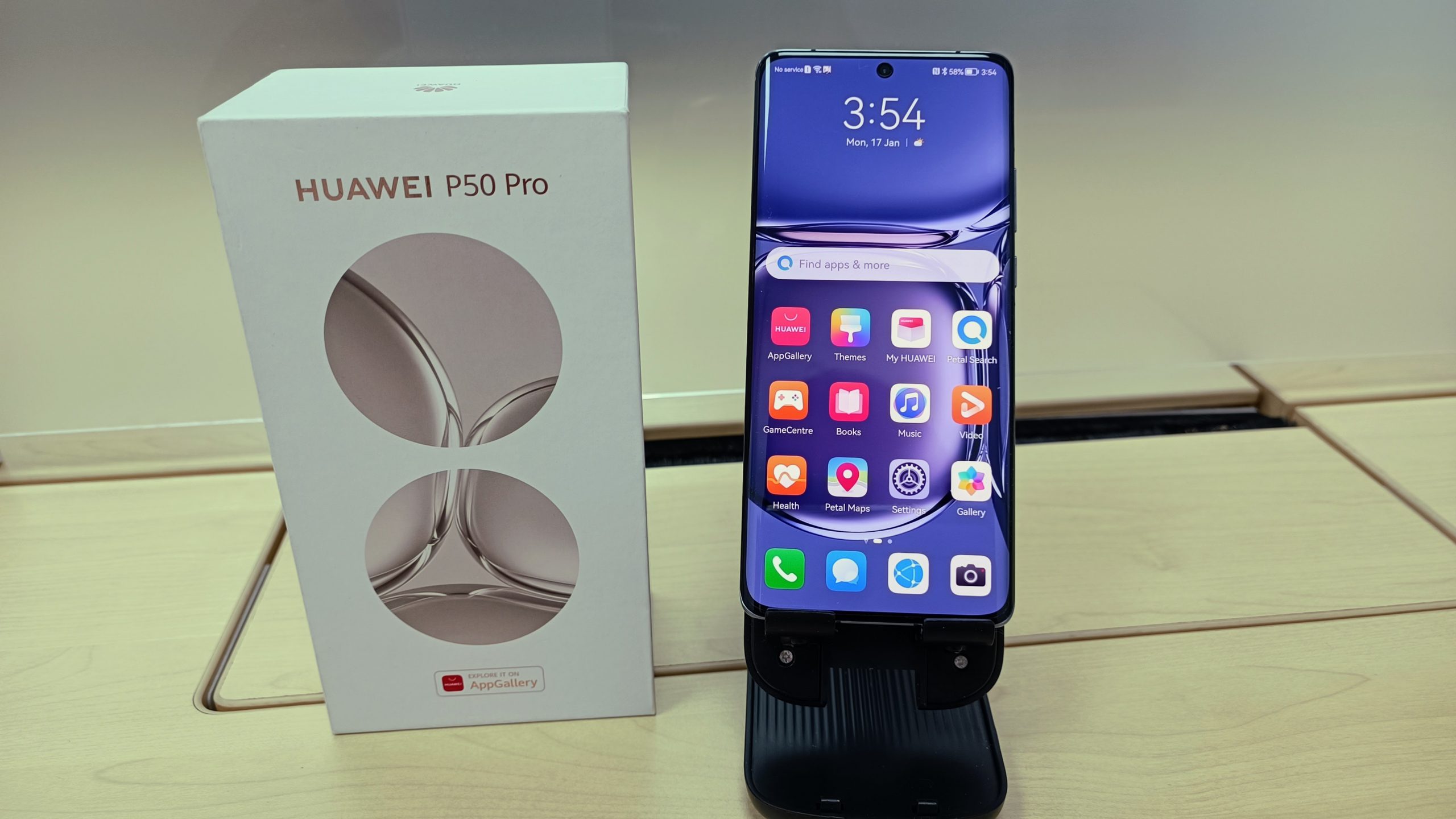 The Smartphone for photography and performance

2022 marks a great start for HUAWEI to launch and introduce its flagship, with all the fierce competitions around, Huawei unveiled 2 phones, the P50 Pro and the P50 Pocket with this time HUAWEI chose to use Snapdragon SOC for both of the models that is flagship performance packed into it.

Lets dive in further and in to this review of the HUAWEI P50 Pro and we take on the journey of experiencing this amazing device that could be just right for you.

The Huawei P50 Pro comes with the following

The HUAWEI P50 Pro design is built on a slim profile with a weight of 195 Grams, which is not too heavy and easy to hold with its slide edge on both side and easy pocketable on your jeans or trousers. Over to the back/rear of the phone, it is made of glassy gloss finish with shines all over the phone, and you can use it as a mirror as well, but that also means the rear of the phone is an absolute fingerprint magnet that requires wiping unless you are using it with the included back case in the box. Towards the camera portion is an island design of two bump consisting of 4 camera sensors and a dual tone flash. bump wise, its not terribly annoying and the included slim profile translucent casing will solve the problem.

Over to the sides of the HUAWEI P50 Pro, on the right hand side, there is a volume up and down button and a power button, while the top houses two microphone, a speaker and an infrared sensor. Over to the bottom of the phone there is one dual shared NanoSIM/NM card slot, one microphone, one USB C port and a bottom speaker. All of the phone sides are made of plastic with silver or gold chrome finish to it. Over to the camera design, the same color applies to the side of the phone and the bottom/top part as well with mirror finishing touch to it. Since there is no 3.5mm audio jack, the Huawei P50 Pro does not come with any converters, so you will have purchase one yourself which includes the headphone.

The HUAWEI P50 Pro comes in two colors, Cocoa Gold and Golden Black. The Color that we are reviewing is the Golden Black and overall impression holding it and using it over daily basis is great so far with good grips using it during the review.

Over to the display side, the Huawei P50 Pro is powered by a 6.6 Inch QHD+ 120Hz curved OLED screen with 1 Billion color display that supports wide color gamut on vivid color display. Being an OLED Display, color representation is well accurate with great contrast level and picture reproduction really pops up.
It has adaptive refresh rate display which means when the screen is sitting idle, it will run at 60FPS, once you start your browsing and work or play, it will automatically adjust up to 120FPS. Depending on your daily usage and just a handful of games does support 120FPS gameplay. Other features include a 300Hz touch sampling rate which is a huge advantage when it comes to the accuracy and sensitivity over the touchscreen when gaming with the phone. On top of that with the density of 450PPI, you will enjoy one of the great displays available with streaming applications available in the HUAWEI App Gallery. However due to lack of Google services, you will either need to load some streaming apps manually, and also no FHD and above Widewine certifications in the Huawei P50 Pro.

The Huawei P50 Pro rear camera consists of one 50MP wide camera with PDAF and OIS, one 64MP telephoto lens with OIS, 13MP ultawide lens, 40MP Black/White lens followed by a dual tone LED flash. Pictures taken are close to accurate with good clarity and details captured properly whether it is in automatic mode or Pro mode, however zooming in too much causes the images taken to loss certain details, even during day time shots.

Night shots wise, the results were quite good as well, able to capture light and shadows surrounding the images within the frame with the exception that sometimes, you will need to have steady hands to take certain environment shots, but that’s only for slightly darker environments. The selfie images are bright and good during day time as well which is powered by a 13MP wide angle lens. A few sample shots were taken over different modes as above and works as intended. A sample of 10x zoom, normal, 108MP and automatic shots taken were balanced, with some noise encountered. All of the AI camera optimizations are present with the hardware optics optimized by Leica.

Over to the performance of the phone, the nova 9 is powered by the Qualcomm Snapdragon 888G 4G Octa-Core Processor, 256GB of internal storage and 8GB RAM. Call quality test shows no issues with a choice of calling via VOLTE or WOWIFI depending on your Telco Carrier with the absence of 3G tower for data or calling. The phone does come with full 4G+ connectivity support, WiFi 6/AX, Bluetooth 5 and NFC. Testing over WiFi connection gets up to an average of 833MBPS transfer speeds, which is a great speed for multimedia, download, gaming and streaming. Video call wise, the nova 9 does the job pretty good as well thanks to its 32MP front camera. If you have a WiFi 6 router, you will be able to take all the advantages without issues.

On the gaming side, being a mid range performance phone meaning that the nova 9 can game pretty well with user defined settings within the games that you are playing. Most of the titles can be ran without issues and with titles that is optimized for high frame rate such as Temple Run 2. The Huawei P50 Pro supports up to 120FPS. Certain games such as Genshin Impact may needed to tweak the graphical settings to medium mixed with high, while maintain the 60FPS cap. During gaming sessions however, it can get pretty warm but after exiting out from the game, it cools down quite fast.

Above is the Benchmark performance, which delivers reasonable scores on each of the test between its graphics, and processor performance. The nova 9 is suitable for those seeking for a Mid High range performing phones.

Battery performance wise, you will get roughly around 9.5 hours of it, a mix of calls, surfing, email, streaming, and a few Genshin Impact domain hunting. Turning on the battery saving mode under 20% will get you around extra 2 hours of conservative usage. The Huawei P50 Pro comes with a 66W fast charger, which will charge up the phone to 100% from 10% in around 50 minutes average.

The Huawei P50 Pro comes with Android 11, with EMUI 12 that brings in an UI that is simple to use, close to the Android Stock UI interface that features collaboration tools such as HUAWEI Share, mirroring your phone and easy one tap NFC connection towards Huawei and HONOR series of Laptop. The camera UI is also easy to use providing tips and help for the user, like tutorials and guide. While it lacks of Google Play Services, you still have Huawei AppGallery which hosts a vast variety of applications and games, which I find it a much improvement now with cleaner, sleeker UI and more selections. On top of that, the inclusion of an infrared sensor enables the P50 Pro to control your TV and certain home appliances with ease.

The HUAWEI P50 Pro is a device much suited for those who wanted a phone with everything in it, that is so slim and simple with a good rear camera, stylish design, social media, VLogging, fast paced flagship ranged quality gaming with modern fresh design combined in a single phone that fits right not just in your pocket, but cool trendy phone just by showing around it. Besides that, with so many improvement over it’s AppGallery with massive selections of apps, HUAWEI does proof that they do care about it’s users and keep on adding more apps and its services towards everyone that uses their product which includes support for eSports title such as PUBG mobile.

The Huawei P50 Pro is now available at RM4,199, for more information VISIT HERE to know more about the HUAWEI P50 Pro

Calling Family from afar with the Galaxy A13 5G