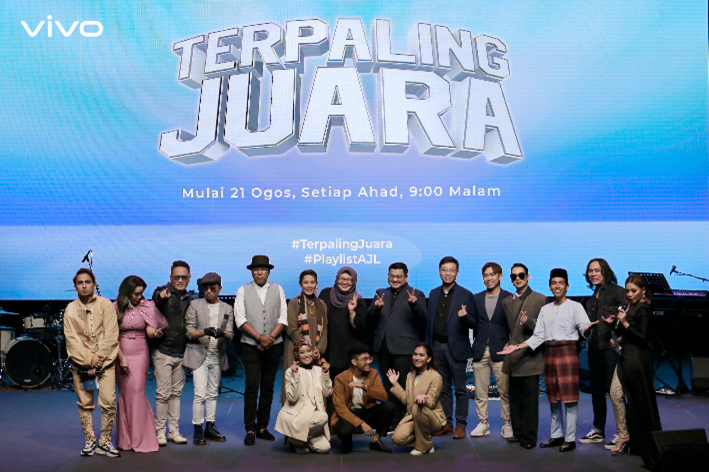 Commenting on the sponsorship, Mike Xu, the Chief Executive Officer of Vivo Malaysia, said: “Vivo is always about encouraging people to create, have fun and explore by offering them products that brings ‘Joy of Humanity’. We are excited to partner with TV3 in sponsoring the “Terpaling Juara” programme, bringing joy and fun to all participants and supporters. Through this programme, we hope to see more young local talents expressing their best self, with the nation cheering them on and witness the rise of local stars.”

According to Puan Nini Yusof, Deputy Chief Executive Officer, Media Prima Television Network, “TV3 is very pleased to introduce a new entertainment programme concept. I am very confident in the ability of the production workforce to produce quality and entertaining TV programmes. For sure, “Terpaling Juara” will find a place in the hearts of TV3’s loyal viewers and Malaysians as a whole.”

Ifa Raziah, Hazami, and Rahmad Mega, three big personalities in their respective music genres, have accepted the challenge to change the course of their singing careers. Ifa Raziah is a dangdut singer, Hazami’s vocals are soft when performing ballad songs, and Rahmad Mega is a rock singer who has previously performed on the AJL final stage. What is their secret weapon for winning this show, and will they be able to compete with the new stars?

Aqeesh (Aqeesh Aleeya, 18 years old), Shaz (Shazreen Shaharum, 26 years old), and Aqmal (Aqmal Ramdan, 26 years old) were chosen during an audition that took place from July 2–3, 2022. Shaz, Aqmal, and Aqeesh were able to acquire their tickets to “Terpaling Juara” out of a total of 380 registrants in the audition session. How will they do in comparison to a group of older vocalists with greater experience?

Haziq Hussni and Shiha Zikir will serve as the show’s hosts, and Datuk Hattan and Fauziah Latiff will serve as the regular judges. “Terpaling Juara,” which will be shown over eight episodes, begins with an introduction concert in which six contestants perform for the three captains, who will then select their two contestants. A prize of RM 100,000 will be awarded to the Most Valuable Winner, RM 50,000 to the runner-up, and RM 30,000 to the third place winner.

As the primary sponsor of “Terpaling Juara,” vivo is joined by Nivea as a co-sponsor, Hot FM is the official radio partner, Berita Harian and Harian Metro are the official media partners, and Xtra and Oh Bulan! are the digital friends.