REALME C30 Review – Good to Look At, And Functions Decently 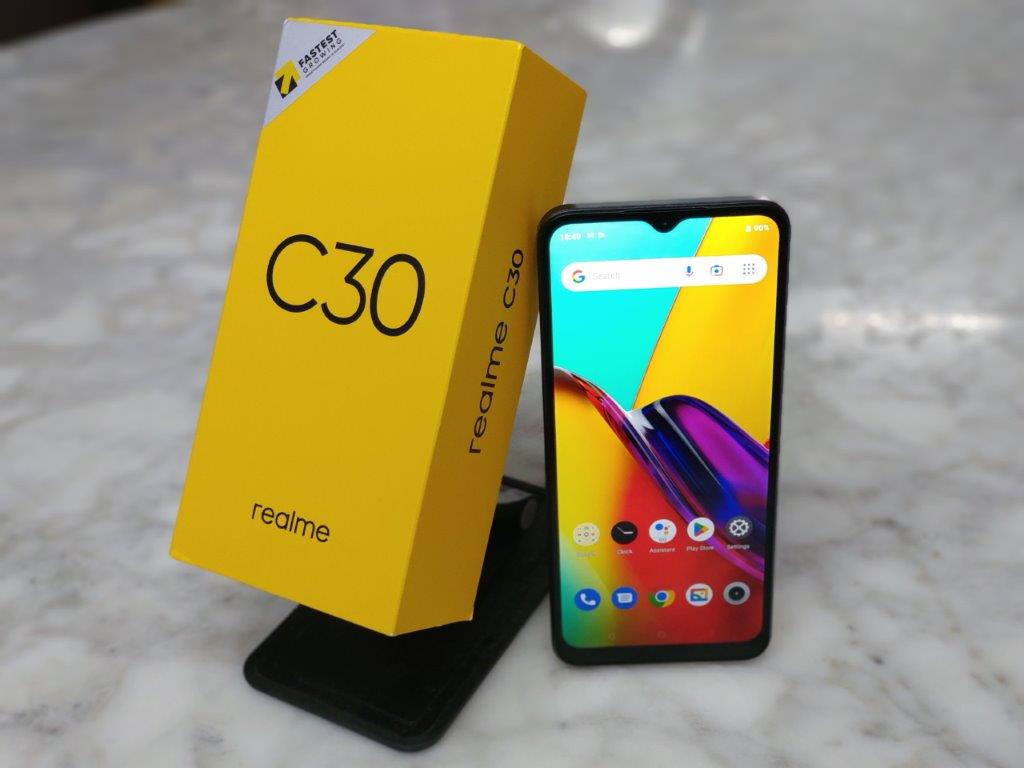 What comes to mind when you heard the word “Budget Phones” ? Some may have the perception that it’s just smartphones that are “cheap for the sake of being cheap”, while some may think it’s just a contingency phone for the kids or elderlies to use. Now, what if I tell you there’s one phone that could deliver decent performance while also being affordable? Look no further as Realme C30 is here just to do that.

Simple, budgeted, and straight to the point, as the C series has always been correlated to its price tag. It’s no stranger to any Realme fans out there that most Realme devices have always emphasized on the theme of speed. That explains the familiar yellow design of the Realme C30 package we received. What is contained inside is also simple :

The Realme C30 is simplistic at its core, sporting a rectangular shape with no other knick-knacks surrounding its body other than the basic volume and power button. This is to be expected since the C30 is catered for the budgeted market. Design, functionality, as well as specification, is foreseeably workaday.

But to sum up the entire layout, C30 is composed entirely of matte plastic — polycarbonate if you will, which means the rear side of the phone is resistant to scratches, smudges, fingers print, and probably some minor falls. Moving on to the front screen, it measured 102 cm² or 6.5 inches, taking up approximately 82.2% of screen to body ratio. Generally speaking, it’s one of the more standard screen sizes it has to offer, which also translates to easy handling and carrying, not to mention the entire device weights only 182g (6.42 oz). The only pitfall I could pinpoint for the device as of now is that the screen is made out of IPS LCD, with that in mind the device attracts fingerprints like a magnet. But this, however, is compensated with the 16.7M screen colours, as with just a switch of the button any fingerprints could be overlapped by the vibrant gamuts that the device has to offer. Not to mention the C30 also comes with its own screen protector.

The peripherals are placed at where they rightfully should be; volume and power button on the right, while the SIM card slot is on the left. One advantage you could notice from the C30 is that the SIM card slot is dedicated microSDXC, allowing 2 SIM card usage while at the same time allowing storage expansion. On the other hand, the single port speakers, primary microphone, 3.5mm headphone jack, and micro USB port are all situated below. One may notice that the C30 lacks a noise filtering microphone, which is understandable given the device’s targeted audience.

Now the camera is a bit of a mixed bag, you see it’s rare to see a smartphone with only a single lens nowadays until we received the C30. But still, the main camera has an 8-megapixel with f/2.0 aperture along with a flashlight sitting right beside the lens. Both the flashlight and the main camera are situated on a rectangular island at the top left corner of the phone’s rear. Personal opinion, the lens diameter is unnecessarily large, making it vulnerable to damage.
As for the front selfie camera, it has a 5-megapixel lens with f/2.0 aperture as well, sitting on the top of the phone’s screen forming a notch.

The Realme C30 also comes in a total of 3 colours, Bamboo Green, Lake Blue, and also Denim Black. The one we received is Denim Black.

The following is a chart regarding the device’s overall performance. It is expected for a budgeted smartphone.

If you couldn’t tell by now, the Realme C30’s cameras were made with minimal hardware in mind. So the greatest selling point is definitely not the camera which is to be expected with its price tag.

Photos taken during the daytime are passable to a certain degree. Having the problem of overexposure, unsaturated colours and obvious noises is one of the more obvious visual impairments you’ll see using the C30 camera. Other than that it could still work as a functioning camera for story posting.

When it comes to night shots that is where the real problem comes in. Imagine the hiccups mentioned above but scaled up by a significant margin. Every shot taken during the night would easily take up 3MB of space, but even with that, it still lacks the expected details, signifying that the UI is pushing its absolute best in processing the images.

The front camera may be the redeeming quality, as although it only has a 5-megapixels lens, it could still produce an on-par quality selfie pic provided the lighting is enough to illuminate the surroundings.

Another redeeming quality is the portrait mode, which was quite decent when I was using it for some outdoor shots. But once again, it will only work well when there is proper lighting.

Video-wise, let’s say it is not meant for content creators or vloggers, as the UI also struggles quite a bit to adjust itself to the movement of objects, along with shadowing, not to mention that the device is also capped at 1080p 30fps. This obviously shows that the videos taken by the device’s camera are only meant for “diarying” or quick videos for messaging. That being said, if you’re looking for better-performing cameras, you may need to look elsewhere.

The Realme C30 clocks at an HD+ resolution of 720 x 1600 pixels (270 PPI density) making it quite on par even with midrange phones. Other than that you’ll be looking at a phone that has a refresh rate of 60Hz, just enough to fit a budget model. On top of that, the C30 is also capable of displaying 400 nits when it comes to brightness. Personally speaking, it’s one of the greatest selling points of Realme C30 whereby it made up for its lackings in external performance through internal performance.

Audio works as it should, decent enough to emit the required decibels, given the fact that it only has a single speaker at the bottom. That being said it works surprisingly okay for a phone within that price range. Perfect for video binging

As for gaming, the phone runs decently well with less intensive games, such as Mobile Legends. But it’ll start to get warm after 30 minutes of the match. And do bare in mind that the highest frame rate that the C30 could reach is 24fps. So any other heavy-performance games are definitely out of the picture.

Running on Unisoc Tiger T612 chipset, powered by Octa-core — 2×1.8 GHz Cortex-A75 & 6×1.8 GHz Cortex-A55, and Android 11 Go with a simplistic Realme UI, it may seem a bit subpar compared to other phones on the market nowadays. But that’s should be expected for a device with its price. The Realme UI seems rather a bit watered down compared to the standard Realme UI found on most Realme phones as the Realme UI in Realme C30 kinda drops a lot of its well-known features. But still, it is expected since the phone was made for general day-to-day use only. Yet, that doesn’t stop the phone from its merits, as one of the pros you could notice from the C30 is that it’s quite responsive with minimum staggers whenever you’re transferring files, this is because the C30 came with UFS2.2 and it offers a faster sequential read and writes speed. It is rather surprising to have that in a budgeted phone.

Nothing too bombastic with the battery as it has a 5000mAh lithium-ion battery packed inside the device. So one should expect that the C30 could run a maximum of 7 hours of screen time provided the brightness settings are at their default. As mentioned above the C30 uses a rather traditional micro-USB port for charging and it will take 2 hours and 45 minutes to fully charge the entire phone.

Storage-wise, the phone comes 2 options : 3GB RAM + 32GB or 4GB RAM + 64GB, each are expandable to a maximum of 1TB through the usage of microSD cards.

Personal thoughts again, I think the phone is on par with the normalcy of being a phone, albeit on the minimum scale. Checking the boxes of being functional and affordable. It works well as a texting, calling, and even a light gaming device for past time. But that’s all the device has to offer, because, at the end of the day, the Realme C30 is still a budgeted phone that is good for being :

At the end of the day, the Realme C30 is built for general use for the mass public. So if you’re looking for a heavier-duty phone, it’s advisable that you look for a midrange phone instead.

If you’re interested to get your hands on the Realme C30, you may check out the following sites for more information :

OPPO A17 Officially Revealed in Malaysia at RM599