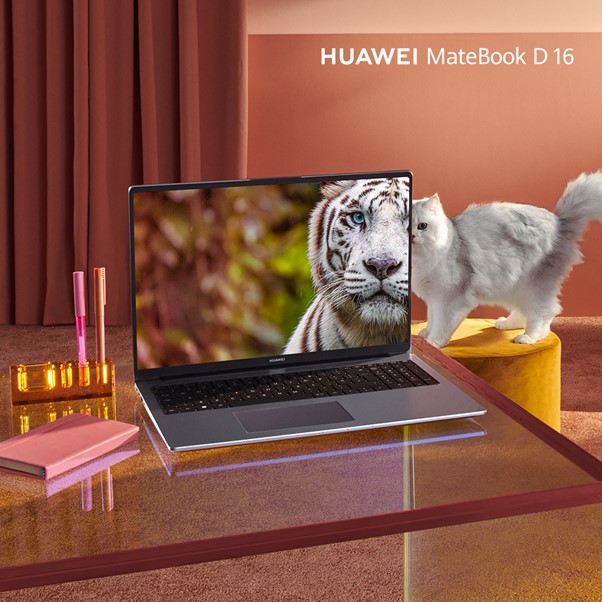 The new HUAWEI MateBook D 16 has a large 16-inch display and is a high-performance, lightweight laptop.

The new HUAWEI MateBook D 16 has a large 16-inch display and is a high-performance, lightweight laptop. This large screen, high performance new member of the HUAWEI Smart Office family not only brings a number of advancements, such as a brand-new eye-comfort HUAWEI FullView Display, high-performance 12th Gen Intel® Core™ H-Series Processor, a light metallic body, as well as cross-device collaborative experience, but also carries the MateBook series’ signature elements in aesthetic, innovation, and smart experience. As it liberates users’ creative potential, the new HUAWEI MateBook D 16 has evolved into a dependable partner for the hybrid office era.

HUAWEI has discovered that there is an increase in demand for 16-inch portable laptops, which is supported by significant consumer research. The need for large-screen, high-performance, and lightweight laptops has surged as more people across the world switch to remote working and studying. These expectations will be met and even surpassed by the new HUAWEI MateBook D 16.

With the brand-new HUAWEI MateBook D 16, users may watch screens for long periods of time while being perfectly safe. It has a beautiful and immersive 16-inch FullView display with a novel 16:10 aspect ratio and a screen-to-body ratio of 90%. The HUAWEI MateBook D 16 offers a broader perspective than a standard 16:9 aspect ratio, enabling users to work with web pages, charts, data, written documents, as well as an amazing entertainment experience, more efficiently. Users may also be productive while on the go with the HUAWEI MateBook D 16, which has excellent mobility and a lightweight metallic chassis that weighs about the same as a 15.6-inch laptop at 1.7kg.

The HUAWEI MateBook D 16 is powered by a 12th Gen Intel® Core H- Series Processor with a TDP of up to 40W, running on up to an i7-12700H, dual channel RAM, and a high-speed solid-state drive, which handles multi-tasking and complex usage scenarios flawlessly and successfully, including data analysis, code compilation, opening multiple webpages, charts, or PowerPoints.

Thanks to the HUAWEI Shark fin Fan cooling technology, users need not be worried about overheating even when doing demanding activities despite the device’s strong performance. The HUAWEI MateBook D 16 unleashes its full potential by allowing users to flexibly switch between Standard Mode and Performance Mode, meeting the different demands of heavy office workload and content creation.

The processing power of the HUAWEI MateBook D 16 is simply one factor in the performance’s potent output. Thanks to the ground-breaking HUAWEI Metaline Antenna technology, which enables users to take advantage of robust wireless networks, this laptop is also a networking beast. When compared to its predecessors, the downloading speed is up 55 % even with weak Wi-Fi signals, and the latency in gaming and video conferences is down 57 % and %, respectively.

The HUAWEI MateBook D 16 boasts 1.5mm key travel, which is unique for a lightweight laptop, and a soft-landing design that was inspired by space probes to make typing all day simple. Users can work with charts, data, and documents more efficiently thanks to the redesigned individual numeric keypad, and physical shortcut keys provide users quick access to commonly used features for productivity increases.

The MateBook 16s maintains HUAWEI’s traditional design with bezels that are only 5.2mm to 7.3mm wide, resulting in a screen-to-body ratio of up to 90%. In addition to having a high screen-to-body ratio, this device also has a more useful 3:2 aspect ratio to give users a better viewing experience. The HUAWEI MateBook 16s gives users greater display area to boost productivity when compared to a similar 16-inch display with a more cost-effective 16:9 aspect ratio.

The HUAWEI MateBook 16s has a comfortable, ergonomic keyboard because it was created as a laptop for professionals. HUAWEI’s keyboard designers have collaborated with the 2012 Lab to enhance both key travel and tactility. The introduction of the Soft-landing design for the keys, which slows the switches down before they land when they are pressed, is the result of engineering collaboration. This makes it easier to maintain a good, pleasant typing experience over time.

Super Device for A Smart Experience

Thanks to Super Device, which combines super productivity with a seamless multi-device experience, the HUAWEI MateBook D 16 and MateBook 16s elevate multi-device collaboration to a whole new level.

It allows simple connection to neighboring HUAWEI devices that are compatible and have seamless interaction between them for a smart working environment. Place your HUAWEI speakers, earphones, mice, keyboards, and printers next to the Huawei MateBook, and the laptop will identify them automatically and invite you to link them quickly and easily.

The Perfect Productivity Device for the Hybrid Office Era

It is clear why the MateBook is the ideal productivity tool for the hybrid office era when considering its huge screen, lightweight mobility, potent performance, clever video conferencing capabilities, and smooth Super Device connectivity. In order to keep charged and connected wherever you go, it also includes a Pocket Charger and other ports for flexible connections.

Priced from RM3,699, HUAWEI MateBook D 16 is available for pre-order from today until 5 August 2022 with freebies worth up to RM1,028* on HUAWEI Official Website, HUAWEI Official Store on Shopee or HUAWEI Flagship Store on Lazada.

Meanwhile, the HUAWEI MateBook 16s is available for grab from today until 5 August 2022 with freebies worth up to RM1,727* on HUAWEI Official Website, HUAWEI Official Store on Shopee or HUAWEI Flagship Store on Lazada!

Remember to check out your shopping cart before 6 August 2022 to be eligible for free gifts*!