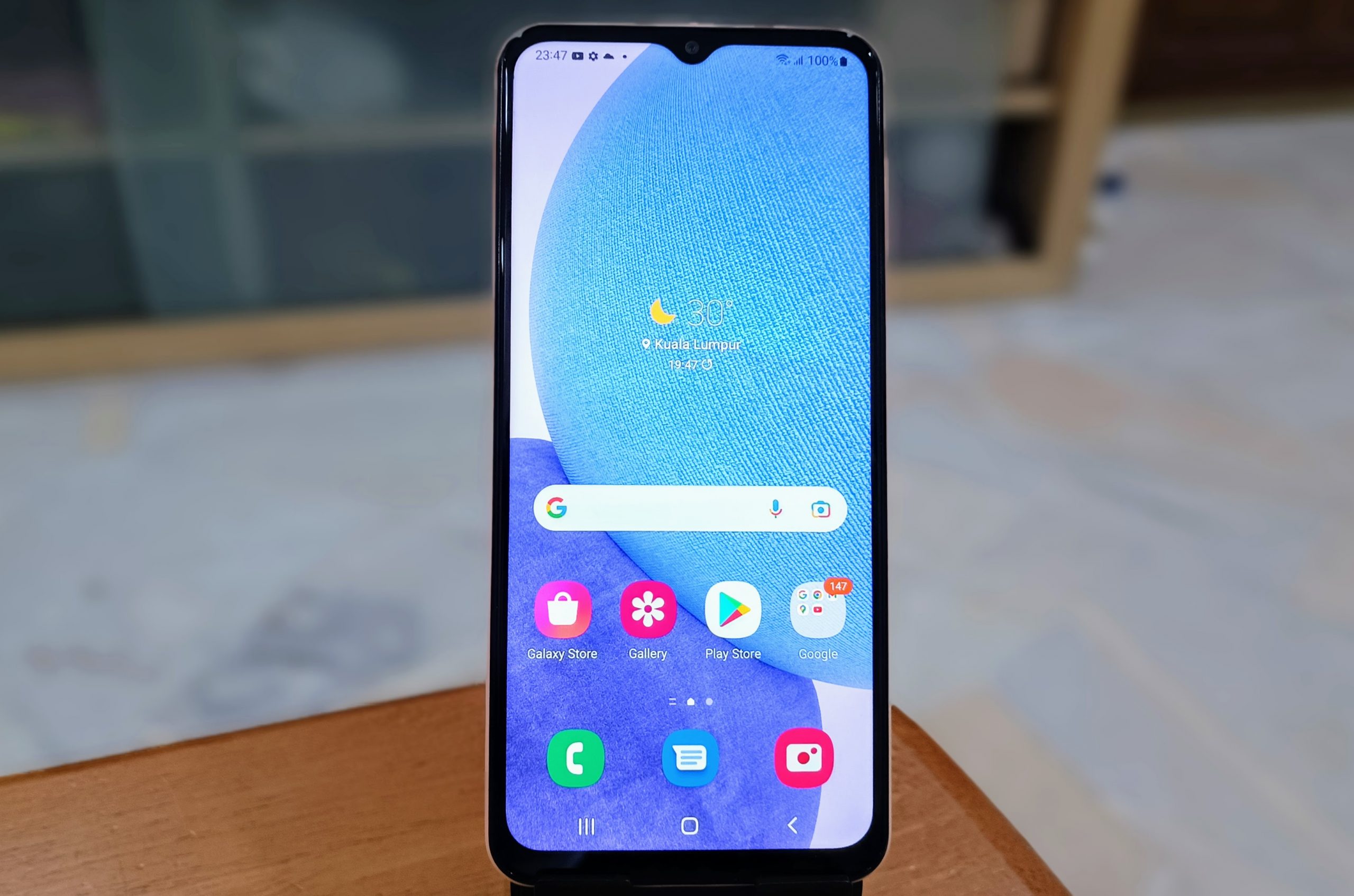 It is rare to see phones today reaching an affordable mark these days, especially with the fluctuation of currency exchange rate and other economic changes are affecting electronic devices as well. But with that we will see brands still trying to produce phone that is not just price friendly, but packed with good hardware and features into it.

With that said, lets dive in to the review of the Samsung Galaxy A23, one of the Galaxy A series model that really wow on specifications and features within it.

The language design of the Galaxy A23 is pretty much the same across the 2022 A series lineup, which is fresh and modern sleek plastic surrounding as the construction body of the phone. The same can be said at the back over the ambient edge over the camera setup zone with seamless body color all around resembling as a piece of device all together. Also the buttons are following the same colors as well. In summary it is an easy to hold device, with good gripping all around it. The Galaxy A23 is a fingerprint magnet so be sure to get a casing or otherwise you will have to wipe it quite often.

The bottom of the phone you will spot the speaker, one USB C port, 3.5mm headphone jack and a Microphone. Over the top you will spot the noise cancelling microphone while towards the right you will have the power button with fingerprint scanner and a pair of volume buttons. Finally over to the left you have the Dual NanoSIM slot which you can also insert a MicroSD Card. I find it simple and nice on the overall placements with really a good set of tactile button that is heighten up that is easy to click. Weigh at 195 grams and thickness of just 8.4mm, its just nice in my opinion and well pocketable in any jeans or bag.

For color choices, you have Awesome Black, White, Blue & Peach which is the color that we are reviewing today, materials mentioned remains the same no matter which color you chose.

Over the display side, the Galaxy A23 is powered by a 6.6 Inch rounded flat edge FHD+ 90Hz screen PLS LED with Gorilla Glass 5, with a reasonably vibrant, clear, colors were display at a fairly accurate level with some color washed out when viewing in different angles. It has adaptive refresh rate which dials down to 60Hz when it is idle and this also functions to prolong your usage. With 90Hz refresh rate it will benefit over usage such as scrolling on a document, web browser and especially gaming which in return giving faster touch sensitivity and responses. This also fits with growing number of Android games that supports decent refresh rates yet you will get to enjoy it with a budget mid tier device.

Specifically on the speaker, when playing music, streaming or games, you will only get to enjoy with the bottom firing speakers, however it is reasonably loud over living room spaces. Dolby Atmos will only work by plugging headphones from the 3.5mm Audio Jack.

The Galaxy A23 camera is made up of four camera lenses on the rear and a single selfie camera in front. The combination makes it somewhat a premium one that sometimes I forget that this is a mid tier budget phone. Selfie image looks nice and most of the details captured with its 8MP sensor. Over the rear camera you have one 50MP wide lens with OIS and PDAF, one 5MP ultra wide lens and a pair of 2MP macro and depth lens accompanied with a flash. This makes the Galaxy A23 rear camera setup is one of the formidable yet competitive in the category with OIS, which at such price point that is affordable yet you have image stabilization on hardware optics level.

A few sample shots were taken with a mix of 10x digital zoom, normal, 50MP and automatic shots taken came out on par with balanced aperture, colors and contrast, both front and rear camera. Close up photo and portrait photo shots are also looking good with foreground and background differentiations but zoom shots had to rightly focused in order to get the clarity with certain exception that sometimes colors could sometimes washed out and dull colors does exhibit at certain environments whether its day or night, otherwise again I am satisfied for the overall when considering it’s affordable price tag and inclusion of OIS.

On video recording you get support up FHD at 30FPS, which considering powered by the SOC and coupled with the camera capability, it is performing fine without issues. FHD video is great with stabilization features and the included hardware OIS.

Specs wise, the Samsung Galaxy A23 is powered by the slightly dated but still current Qualcomm Snapdragon 680 Octa Core Processor, 128GB of internal storage and 6GB RAM with Android 12 with One UI 4.1. For such configuration, I take it as a nicely balanced configuration which if you need more storage, you still have the option of expanding it via MicroSD card. Apart from that the usual support such as VOLTE, WoWIFI option is available as well when enabled, delivering crystal clear voice quality whether from the earpiece or bluetooth earpiece. The Galaxy A23 comes with 5Ghz AC WiFi ensuring stable connectivity on all your work and entertainment needs.

Over to the gaming side, this phone performs reasonably well on mobile esports title such as PUBG and Mobile Legends. Much intensive titles like Call Of Duty Mobile might need to lower down the graphical settings while maintaining the 60FPS refresh rates to keep things smooth. In summary majority of the apps and light to medium games should work OK on daily basis.

Benchmark performance is pretty much indicating this is a mid tier SOC below the Snapdragon 695, delivering mid tier range performance as shown above. Such score is great as a work and multimedia consumption device. While it is just a synthetic score, it is also highly suitable for those who are looking for a work only phone or a secondary device with good camera support.

Battery performance wise, you will get around 12 hours of it, a mix of calls, surfing, email, streaming, and a few Call Of Duty matches . Turn on the battery saving mode under 20% will get you around extra 3 hours of conservative usage. Charging up with 25w adaptor can get you from empty to fully charged in less than 3 hours with 5000mAh capacity battery.

The Samsung Galaxy A23 is a right sized, highly affordable, good camera and multimedia power house device that is rightly termed as an ‘awesome’ device for all ranges of age and purposes. With a 90Hz refresh rate display, this is nice for movie enjoyment, streaming, play a few games and casually take photo with an acceptable quality which really makes me happy during the review period. With Samsung’s reliable commitment, you will at least get 3 years of security upgrade.

The Samsung Galaxy A23 is now widely available at Awesome affordable price of RM999. For more information, click HERE to find out more.