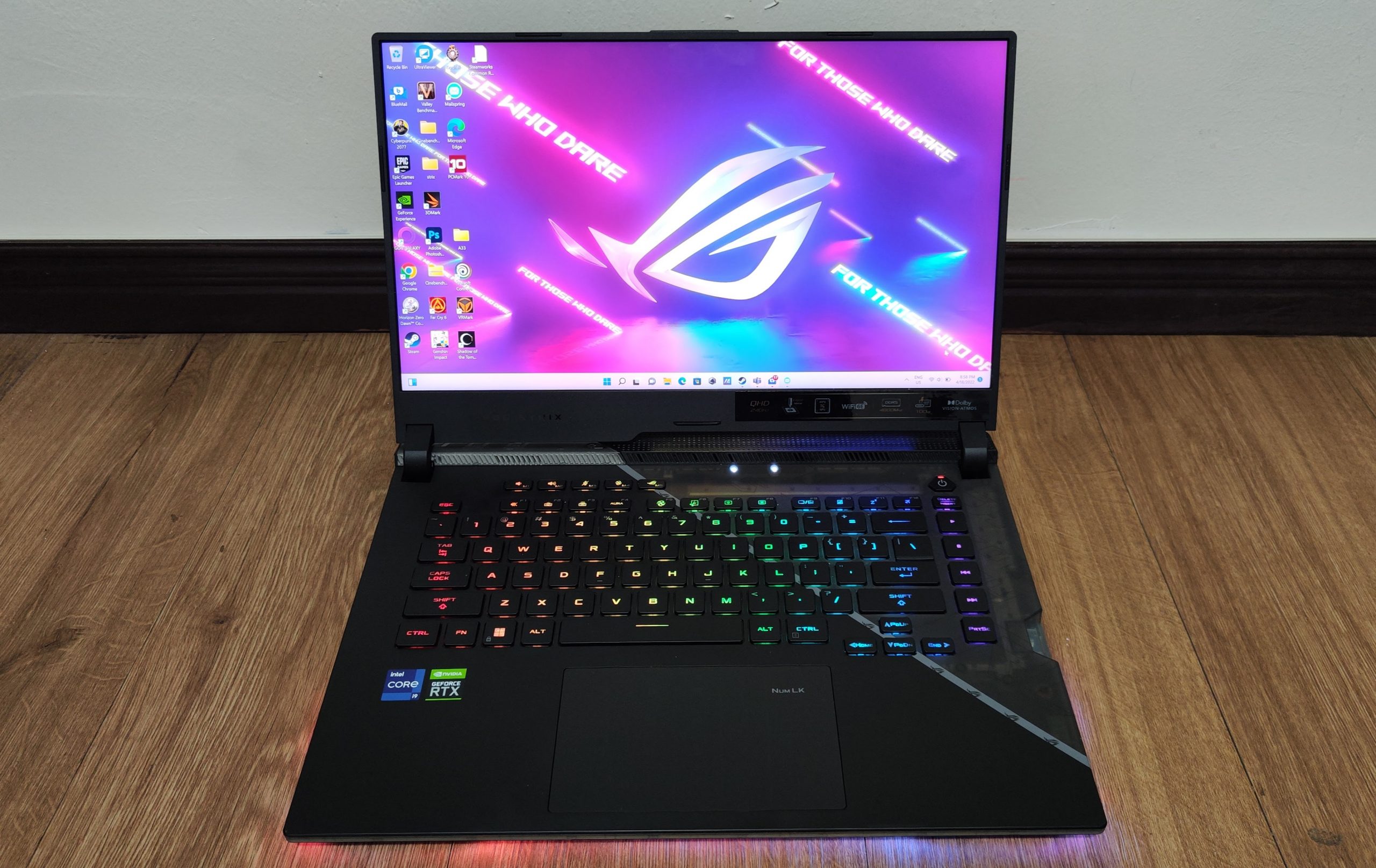 ASUS has been coming up with some great lineup of ROG series of Laptops lately this year, both from AMD and Intel too. One of the ROG model that we recently just received is the ROG Strix Scar 15, which the name stated, it’s a 15 inch gaming laptop that packs quite a powerful specs inside to start.

As a start, under the Strix Scar 15 series, there is two variant, with the most major difference where one came with GeForce 3070 Ti and another one with GeForce 3080 Ti dedicated graphics card in the laptop, the rest pretty much remains the same.

The ASUS ROG Strix Scar 15 design retains the same outlook from the 2021 Strix model with mostly targeted over for specifications and features upgrades to it, mainly focuses on its gamers and enthusiast needs outlook that fits everywhere due to it’s size. The body of the laptop is mostly made up of plastic over the exterior while the same can be said over the lid cover. The whole laptop weighs 2.30KG with smooth texture touch all around the laptop that you will see certain area such as the keyboard area which is partially translucent, giving some of the sneak peek of the internals.

Hinge portion wise, ASUS ROG Strix Scar 15 can’t lift up to a flat angle but that is because the hinge is design with a gamer’s and rugged aesthetic that only lets you lift to view in a normal looking angle so you can be focused on your gaming and work.

The keyboard is comfortable enough for your everyday typing and the layout is done quite well whether the RGB backlight is turned on or off. Overall usage with document authoring, gaming and editing is good combining with its keyboard that does have RGB Aura backlight, you can game and work in a slightly darker environment which extends over towards the LED underglow area and the back of the screen area where the logo is located. All of the RGB lights can be configured and sync at the same time.

Over to the trackpad, It is located just right below the keyboard, which is wide and double as a NumLock. Such feature is a great addition where if you plug in the mouse, you can alternately switch the touchpad as a NumLock keys just by tapping it for 2 seconds giving more control for all your calculation needs during work. The whole touchpad is spacious and it supports Windows Precision Drivers which means that all Windows 11 trackpad gestures and navigation is fully supported.

The ASUS ROG Strix Scar 15 featured a 15.6 WQHD display with a refresh rate up to 240Hz which supports Nvidia Adaptive Sync. A combination of such screen will give an edge for gamers and creators alike with blazing fast 3ms response rate for those who likes to play FPS Genre games and pretty much work with fast frames video editing as well. Another advantage for such display that it comes with Dolby Vision and Atmos for more immersive visual and audio experience with the Laptop speakers that is impressive with deep bass and balance treble during our testing.

The ASUS ROG Strix Scar 15 comes with a standard supplied 280W charger which is heavy and intended for heavy usage and provides faster charging. However alternatively you can also use an 100w USB Type C to C charger to charge the Laptop, as long it supports PD it will do, but take note it will take slightly longer to fully charge the laptop, alternatively selecting towards normal profile will charge faster and much stable if you are charging via Type C USB. Based on simple charging test, the 280W charger is be able to charge from 10% to 100 % around 3.5 hours on average. Usage wise, from normal usage perspective, it can easily last up to 5 hours average as long you are not gaming, and purely rely on the Intel Integrated GPU.

Over on the back portion of the laptop you will spot 1 AC adaptor port for charging, 2 USB ports for Data, Display and Power and an Ethernet Port. Towards the left you have 2 USB 3 ports followed by a Combo 3.5mm audio jack. At the right you get a MicroSD slot and a Microphone/Headphone combo Jack. On the right side you have ASUS Keystone, is an actual physical key designed for gamers to set up their gear for an immersive experience. Keystone connects to the exclusive slot on the right side of the keyboard by magnetic force. When Keystone is docked, It can apply lighting effects, sound effects and activate Shadow Drive storage capacity.

The ASUS ROG Strix Scar 15 does a pretty good job in the thermal department, hovering around 55 degree celsius in a normal temperature room while working on documents with minimal noises over the fan heatsink giving it a pleasure working with the laptop. Even on heavy load such as gaming, encoding, heaving graphic intensive task, noise is expected as the fan will speed up in expected manner and working its best to dissipate the heat away under 95 Celsius.

The ROG Strix Scar 15 features the latest Intel 12th Generation i9-12900H processor with Nvidia GeForce 3070 Ti graphics, up to 32GB of system RAM and up to 2TB of NVME storage. Below are the benchmark results.

During benchmark we observed that the temperature rose up to about 95 degree Celsius peak but it dissipates quite fast after about 10 minutes to its idle temperatures. Overall scores are comparable with most of the modern current and new desktops on par with new game specifications and requirements.

Being a gaming performance laptop, all of the games that we tested reaches well above 90FPS and ESports title is not an issue at all which be able to go beyond 150FPS. We would expect any neat future game titles are capable to run on this laptop without a sweat. Even plugging in a USB C to charge will get you some performance uplift although it is capped at 100w.

Over general performance, from Microsoft Office to web browsing, it works pretty well and is satisfying. Over to streaming, you can stream beyond 4K without issues encountered.

With its starting retail price of RM10,699 as of the time of this writing, this is one laptop that does scream the gaming style that combines powerful portability beast into a laptop that you can carry everywhere retaining all the best performance you can get, on par to most gaming desktop specifications one can have today. So whether is work or play, this is an absolute companion you can bring along for it and show off the Aura RGB everywhere.

Special thanks to Asus for loaning us the product to review

For more information on the ROG Strix Scar 15 , click here

HONOR introduced the MagicBook 14 laptop and Pad 8 tablet after HONOR 70.