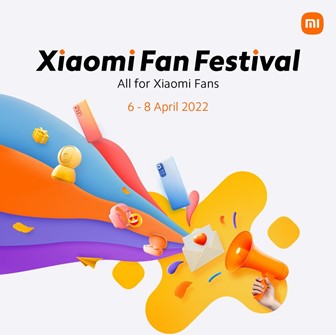 Xiaomi, the world’s leading technology company, announced the start of its 12th annual Xiaomi Fan Festival today, themed “All for Xiaomi Fans.” The jam-packed schedule includes a variety of online and offline activities in over 30 markets to connect with Xiaomi fans all over the globe. And there’s a stylish present for Xiaomi Fans this year, with the chance to win one of 300 Redmi Note 11 XFF Special Edition gift packages, adding to the fun.

Xiaomi has released a new branding video titled “Innovation for Everyone” on its official YouTube channel to commemorate this year’s Xiaomi Fan Festival. Xiaomi emphasizes its continued commitment to and belief in innovation for the benefit of everyone, everywhere in the video. The video features a variety of Xiaomi smartphones and new AIoT products that, like a friend, keep users engaged and motivated throughout the day.

Xiaomi views the video as an emotional connection with Xiaomi fans and customers, encouraging them to use technology to pursue their own happiness. The video also serves as an opportunity to recognize Xiaomi Fans, who are the real stars of the show and the driving force behind the brand and its unique products.

Xiaomi has released a special edition smartphone for Xiaomi Fan Festival 2022: the Redmi Note 11 XFF Special Edition. This is an exclusive variation of one of Xiaomi’s most popular smartphones launched this year. The Redmi Note 11 XFF Special Edition comes in a transparent tote bag and is wrapped in fashion-forward gift packaging with a creative and stylish design. The packaging stands out as a fashion statement in and of itself.

Redmi Note 11 Xiaomi Fan Festival Edition comes in 4GB+128GB retailing for RM 749 from 6 April onwards, exclusively online. Those looking to purchase this limited edition Redmi Note 11 can enjoy a RM 50 discount during the special flash sale via Lazada or Shopee on 6 – 8 April 2022, making it available for just RM699.

Showcase Your Style With a Virtual Xiaomi Fan Card

Xiaomi fans are invited to show off their unique style and personality with a Virtual Xiaomi Fan Card as part of this year’s celebrations. They can join up for the online platform at mi.com, use their Account ID to log in and create their own virtual avatar. The Virtual Xiaomi Fan Card is also a special portal where Xiaomi Fans can unlock a series of exclusive coupons1, ready for spending on their Xiaomi wishlist.

The gift package also contains a physical Xiaomi Fan Card, staying true to the festival’s theme of “All for Xiaomi Fans.” The design was inspired by a chipset found in a Xiaomi smartphone launched in 2017. This raw material was Xiaomi’s muse while creating this unique souvenir because 2017 was also the first year the XFF campaign started to reach out to Xiaomi fans worldwide.

The Xiaomi Robot Vacuum-Mop 2 Pro features 10,000 vibrations /min of high-frequency sonic vibration mopping. The LDS laser navigation system scans and maps the complex environment of the entire home fast and accurately, allowing the robot to plan its cleaning route quickly and accurately, even in low light. It also has a 5,200mAh battery and a powerful 3,000Pa suction, as well as 3 vacuum-mop modes and 4 suction power settings. Xiaomi Robot Vacuum-Mop 2 Pro is priced at RM 1,499 and will be available in Malaysia from 6 April.

With 4 suction power settings, the Xiaomi Robot Vacuum-Mop 2 has a 2,700Pa strong suction for instant cleaning, effectively removing dirt and debris in an instant – from tiny dust and hair to large crumbs and debris. It also comes equipped with an upgraded battery capacity of 3,200mAh. Xiaomi Robot Vacuum-Mop 2 is available in Malaysia from April 6 and is priced at RM 1,099.

The Xiaomi Robot Vacuum-Mop 2 Lite has a strong 2,200Pa suction that effortlessly picks up dirt for a better cleaning effect. It also comes equipped with an upgraded battery capacity of 2,600mAh. This variant is available in Malaysia from April 6 and retails at RM 799.

Those who are keen to purchase are in for a treat as Xiaomi will be having a special deal for the Xiaomi Robot Vacuum-Mop 2 series. From April 6 to 8, 2022, customers can buy via Xiaomi’s official stores on Lazada and Shopee at special early bird prices listed below:

For more information on the latest news, promotions and Xiaomi Fan Festival 2022 updates, follow us on Facebook.

Get Ready For SAMSUNG’s Season of Gifts!