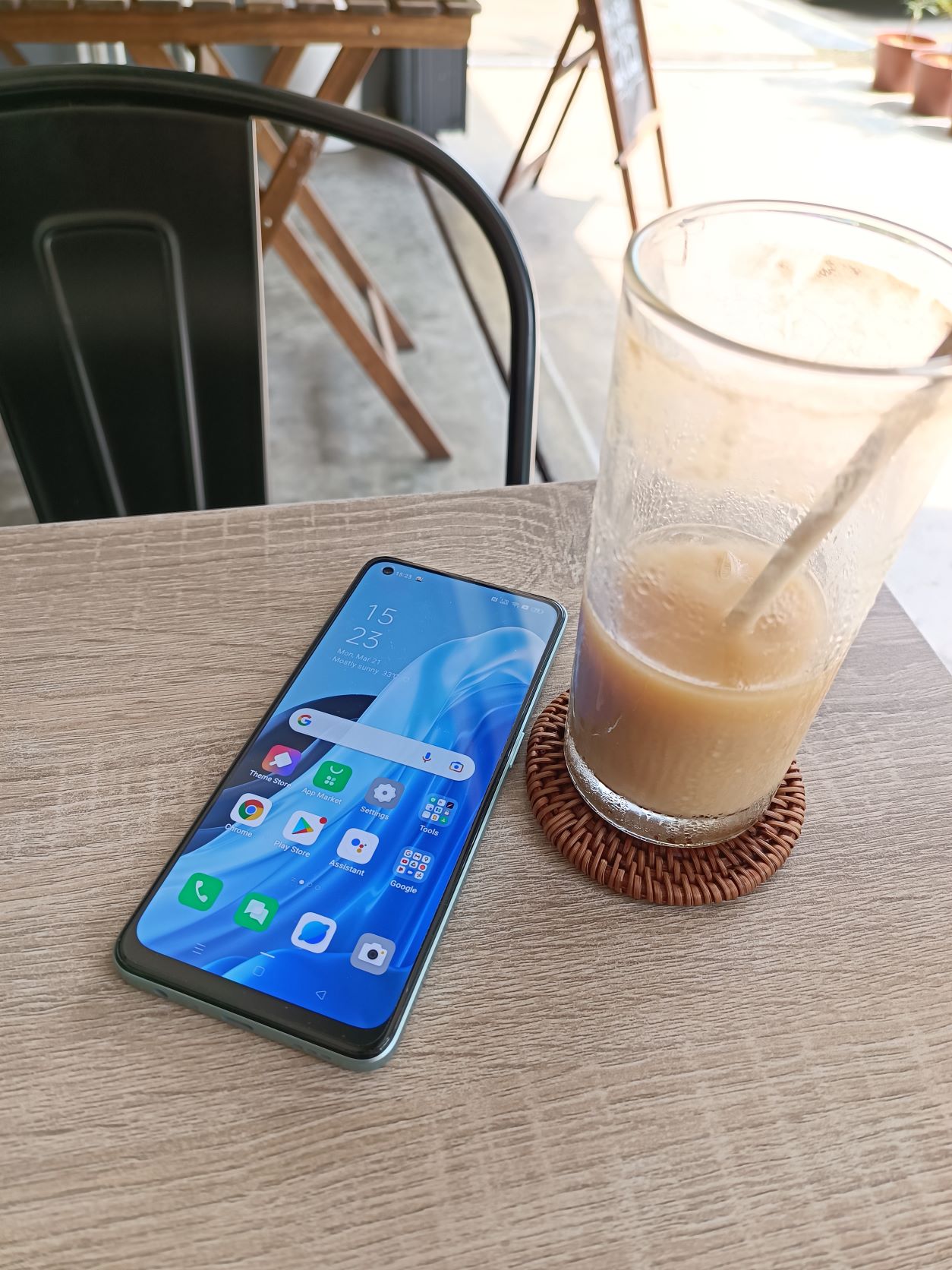 Just about last month, we had just review the OPPO Reno7 5G which is a really attractive device in the segment that is premium and now OPPO came out with a slightly tuned down in terms of certain specifications but still retain some of its sibling’s feature to the Reno7 Z which is a lighter in size, but looks pretty similar.

The OPPO Reno7 Z 5G design is flat edged based which OPPO uses their method of Three-layer texture and Two-layer coating process which gave more shines over the phone while maintaining the body durability . While it is definitely the affordable version of the Reno7 series, the premium feel is still retained with not much of changes or compromised being made to it and does give the premium feel that I appreciate especially there is no fingerprint smudges making it easy to clean if there is dirt or dust on it. The overall coating looks nice when placed over bright environment, the color does change like rainbow as well. The camera portion is placement of bump consisting of 3 camera sensors and a flash. Gone is the island grouping on the camera but it made the two main lens heighten up abit. When putting it flat on a table, it definitely doesn’t sit flat, but since it comes with a soft case, fitting it on the OPPO Reno7 Z 5G will be just nice and protects it just fine.

Dual Orbit Lights is one of the highlights where there is Blue LED lights hidden around the rings of the lens, which function as a notification reminder, new notifications, charging, and it will go its breathing notification mode if you have any unread messages. When you are launching games on the phone, the LED will light up as well.

On the right hand side, there is a power button, while the top houses a noise cancelling microphone. On the left side there is a pair of volume button and the SIM/MicroSDXC card slot that supports up to 1TB storage while below there is a speaker, microphone, USB C Port for data/charging and a 3.5mm headphone jack. All of the phone sides are made of slim sized aluminum chassis. Over to the camera design, the same color applies to the side of the phone and the bottom/top part as well with smooth glitter touch to it with the slightly glossy portion surrounding the camera.

The OPPO Reno7 Z 5G weighs around 173 Grams and comes in 2 colors, Cosmic Black and the Rainbow Spectrum color that we are currently reviewing it

Over the display portion, the OPPO Reno7 Z 5G is powered by a compact 6.4 Inch FHD+ 60Hz AMOLED screen that supports HDR10+ and peak brightness of 600nits. Display is good on with visible color accuracy and contrast level with average bright surrounding environments tested. Other features include a 180Hz touch sampling rate which is an advantage when it comes to the accuracy and sensitivity over the touchscreen when gaming with the phone while it will go down to 120Hz touch sensitivity on normal application usage, this is perhaps to optimize battery usage. On top of that with the density of 409PPI, you will enjoy it with its compact slim factor with good experience. While the phone only has loudspeaker audio on the bottom portion, it is fairly loud on most environment and furthermore HD playback is fully supported on Netflix with its Widevine L1 certification.

Over to the camera side, the OPPO Reno7 Z 5G rear camera consists of one 64MP wide camera with PDAF, one 2MP Depth camera and a 2MP macro lens, followed by a LED flash. Pictures taken is close to accurate with clarity and details captured well and portrait mode the shots can be easily taken without much of adjustments done to it with a good amount of light. Night shots outcome are well and good amount of shadows can be seen and identified. The selfie images are bright during day time as well which is powered by a 16MP wide angle lens which also portrait mode capable.

A few shots were taken over different modes as above and the result works as it is. A sample of 6x zoom, normal, HiRes, Bokeh Flare and automatic shots taken were balanced and works well.

On video recording you get support up to 1080P at 30FPS only with stutters are visible while recording but it’s very minor with good details during recording. Dual video mode is also supported which you can capture both front and rear recording at the same time. Such feature is good for VLoggers and casual video takers that be able to take the advantage.

Operating system side is run on Android 11 with its new ColorOS 12 that bring several improvement toward UI fluidity, Game Focus Mode, fast app switching and RAM extension up to 5GB as long you have enough internal space remaining. Task app switching between games and apps are able to resume in an instant within seconds without much effort of reloading which is a good thing. Testing over WiFi connection gets up to an average of 420MBPS transfer speeds, ensuring fast speed for multimedia and streaming. If you have a WiFi 5 router, you will be able to take all the advantages without issues.

Over to the gaming side, this phone can take it on par with most of the mid range hero phones recently released with good framerate with still some occasional stutter, however this can be resolved with lowering some of the graphic settings to keep games like Call Of Duty to maintain around 60FPS. Flagship games such as Genshin Impact will just work fine with app switching constantly and load times were pretty fast as well.

Above is the Benchmark performance, which delivers an quite good scores on its category between its graphics, and processor performance. The OPPO Reno7 Z 5G is suitable for those seeking for a Medium premium range performing phones.

Battery performance wise, you will get around 9 hours of it, a mix of calls, surfing, email, streaming, and a few Call Of Duty matches. Turning on the battery saving mode under 20% will get you around extra 2.5 to 3 hours of conservative usage. The OPPO Reno7 Z 5G comes with a 33W SUPERVOOC fast charger, which will charge up the phone to 100% from 10% in around 1 hour average.

The OPPO Reno7 Z 5G is a phone that is generally for those who are seeking for simple content creation with good set of camera setup with some mobile photography features in mind, eSports and casual gaming with a AMOLED screen, social media uploads while just paying for much affordable segment and definitely priced lower than the Reno7 5G. While on the productivity side, this phone has all the power for the work side with fast 5Ghz WiFi connectivity, with OPPO Share, you can also transmit and receive files from nearby devices. This phone will also benefit in the future with the support for 5G with your preferred operator.

Starting from now, OPPO Reno7 Z 5G will be available in two colors at RM1,699 for the 8GB+128GB variant and can be pre-ordered from 29th March 2022 with first sales starting from 2nd April 2022 with pre-order purchases will be entitled complimentary gifts worth RM233.

Pre-order can be made HERE