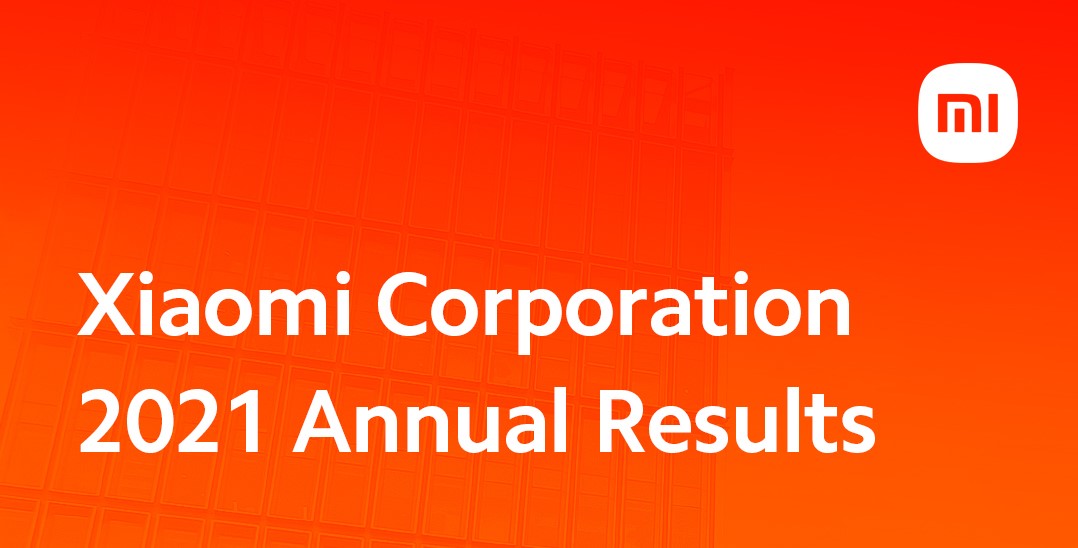 Xiaomi Corporation (“Xiaomi” or the “Group”; stock code:1810), a consumer electronics and smart manufacturing company with smartphones and smart hardware connected by an Internet of Things (IoT) platform at its core, has released its audited consolidated financial results for the year ended 31 December 2021.

Xiaomi’s products are still attracting global attention in 2021. Xiaomi’s global smartphone shipments increased by 30.0 % year-over-year to a new high of 190.3 million units. According to Canalys, our smartphone shipments ranked 3rd in 2021, with a record-high market share of 14.1%.

Xiaomi’s overseas business grew rapidly last year as Xiaomi pursued its international strategy. Revenue from overseas markets reached RMB163.6 billion in 2021, increasing 33.7 % from the previous year and accounting for 49.8% of total revenue. Apart from smartphones, the internet and IoT businesses in other regions are growing. In 2021, overseas internet revenue reached RMB5.0 billion, increasing 84.3 % year-on-year and accounting for 17.8% of total revenue.

Emerging markets maintained strong growth momentum. In Latin America and Africa, Xiaomi’s smartphone shipments in 2021 grew 94.0% and 65.8% year-on-year, respectively, and were the No. 3 smartphone vendor in both regions.

Xiaomi 12 series has instantly become one of the most popular premium smartphones after launch leveraging on its hardware and innovative technologies. Its omni-channel sales exceeded RMB1.8 billion in just 5 minutes after launch.

In the meantime, Redmi continued to bring cutting-edge technologies to the mass market and offer the ultimate user experience across highly accessible products. The Redmi K50G and the Redmi K50G Mercedes-AMG Petronas Formula One Team Edition sold over RMB280 million in the first minute of the sale in February 2022. Simultaneously, Xiaomi solidified its offline channel in mainland China, which has played a greater role in premium smartphone shipment growth.

Strengthened synergies of AIoT business and advantages of smart ecosystem

Xiaomi remains focused on executing the “Smartphone × AIoT” strategy globally. As of December 31, 2021, the number of connected devices (excluding smartphones, tablets, and laptops) on our AIoT platform reached 434 million, an increase of 33.6% year-over-year; the number of users with five or more devices connected to our AIoT platform (excluding smartphones, tablets, and laptops) reached 8.8 million, representing a year-over-year increase of 40.4%. In December 2021, the MAU of our AI Assistant (“小愛同學”) reached 107.0 million, up 23.3% year-over-year, and the MAU of our Mi Home App grew to 63.9 million, representing a year-over-year increase of 42.0%.

Xiaomi’s global shipments of our smart TV reached 12.3 million units in 2021, against the overall decline in the global TV market, thanks to our leading position in AIoT and huge user base. Smart TV shipments ranked No. 1 in mainland China for the third year in a row, according to All View Cloud (“AVC”), and were among the top five globally.

Xiaomi launched the Xiaomi Pad 5 series in August 2021, and it has since grown in popularity; according to Canalys, its shipments ranking in mainland China rose to No. 4 in the fourth quarter of 2021.

Xiaomi’s revenue for IoT and lifestyle products increased 26.1 % year-over-year to RMB85.0 billion in 2021.

Meanwhile, the TV internet user base also maintained solid growth. In December 2021, MAU of our smart TV grew more than 29% year-over-year, and the number of TV paid subscribers increased 14.5% year-over-year to 4.9 million.

Our advertising revenue in 2021 is RMB18.1 billion, representing an increase of 42.3 % year-over-year, thanks to our expanding user base, a higher proportion of premium smartphones, and better monetization capabilities. Xiaomi’s advertising revenue in the fourth quarter of 2021 was RMB4.9 billion, having an increase of 34.0 % year-over-year, due to growth in global pre-installation revenue and overseas search revenue, which was the 8th consecutive quarter-over-quarter increase.

The internet services revenue overseas increased by 79.5% to RMB1.6 billion in the fourth quarter of 2021, driving Xiaomi’s growth momentum.

In 2021, Xiaomi’s R&D expenditures reached RMB13.2 billion, an increase of 42.3% year-over-year. Aiming to pursue technology advancement as a core value, Xiaomi plans to invest more than RMB100 billion in research and development over the next five years.

Xiaomi attaches great importance to the development and retention of our technical talent. For the third year in a row, Xiaomi has held the Xiaomi Million Dollar Technology Award, with the CyberDog bio-inspired robot project team that takes away the award in 2021. This demonstrates our dedication to our engineers’ pioneering attitude and technological innovation. Xiaomi also announced new share incentive awards for young engineers, technology specialists, middle and senior management, and New 10-Year Entrepreneurship Program participants.

Xiaomi demonstrated relentless pursuit of cutting-edge technology by equipping our first proprietary ISP Surge C1 and charging chip Surge P1 in two premium flagship models, Xiaomi MIX FOLD and Xiaomi 12 Pro, respectively. With the launch of the liquid lens in Xiaomi MIX FOLD and the ProFocus algorithm on our latest Xiaomi 12 and Xiaomi 12 Pro, we emphasized our camera and imaging technology, further optimising the photography experience.