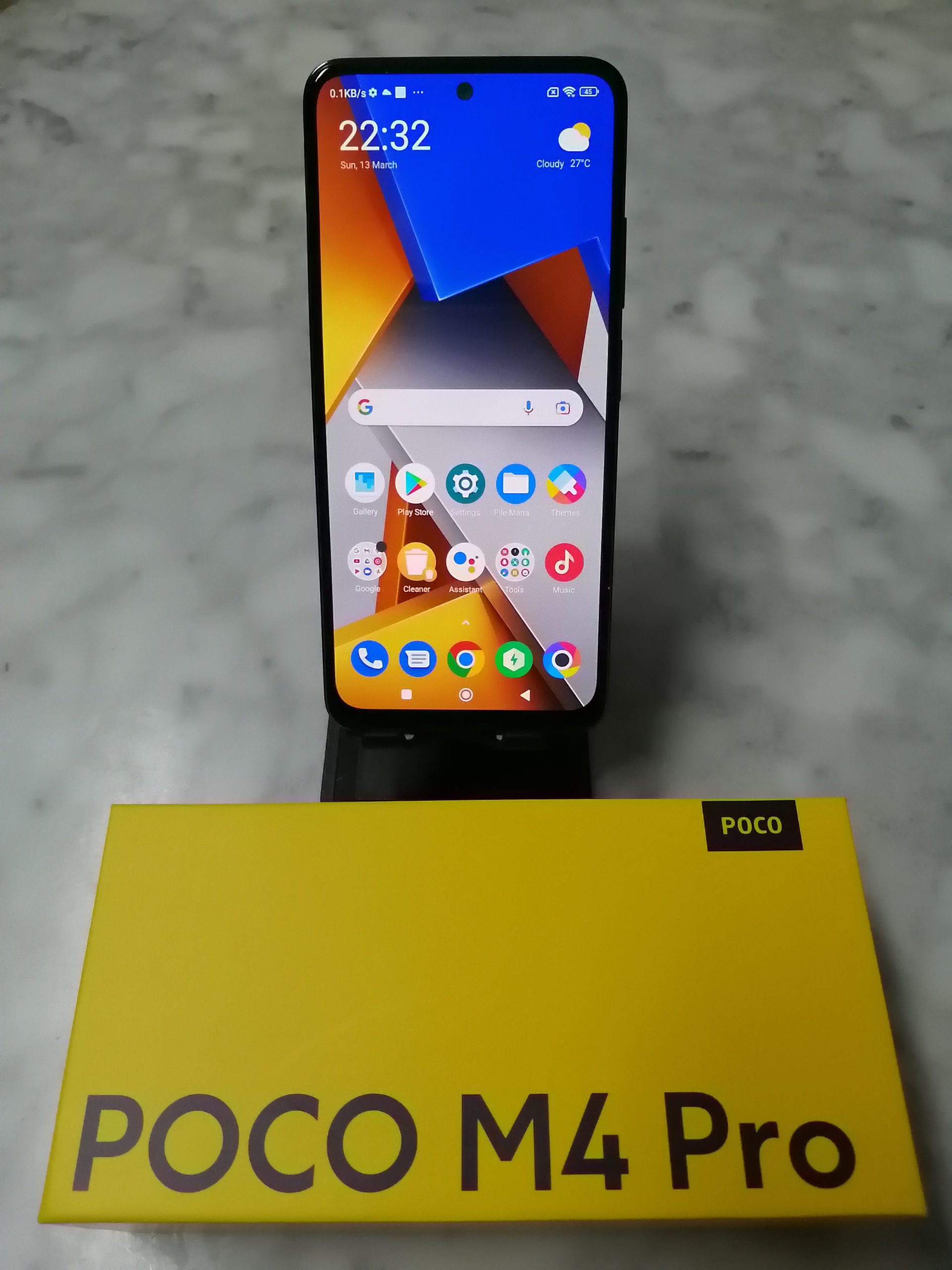 Hey hey hey people! I’m back at it again with another phone review! And today I’mma review the POCO M4 Pro model! Well without further ado, let us dive right into it.

Let’s have a look at the package that comes with the POCO M4 Pro. At first glance, it looks identical to most POCO phone packages that came before. The signature yellow overview with the phone’s name is printed vertically on the top right corner followed by the iconic POCO logo at the opposite side of the corner. The same name can be found printed at the center located at both sides of the packages, with the sentence “With easy access to the Google apps you use the most” printed below the name. Whether it’s true we’ll gotta find out real soon.

The contents inside the package include the following :

The POCO M4 Pro has a rather curvy design, with a height of 163mm (6.417 inches) and a width of 8.75mm (0.3445 inches) as well as a weight of 195g (6.88 oz). At first glance, it looks almost like any other smartphone. It has a high-quality plastic build, the front screen is flat with a round cut-out section on top where the front camera is located and it also has very thin side bezels which allow the screen to take up more space. The moment you flipped it backward, it stands out instantly as the rear camera is situated within a square-ish “island”. Now speaking of the camera, as mentioned situated at the main corner of the square platform is the main 64-megapixel camera which caters for wide shots. Accompanied by 2 more lenses; one which is an 8-megapixel lens for an ultrawide shot and another 2-megapixel lens for macro shots. Other than that is also a LED flashlight situated right beside the 2megapixel lens. On the right side of the phone is the volume and power button. While the left side of the phone consists of a dual SIM card slot and a dedicated microSD slot as well as the word “Designed by POCO” etched on the lower end. Moving on the top is the headphone jack along with the voice-canceling microphone and infra rate sensor and also a speaker. Now at the bottom of the phone is another speaker, a type C jack, and also a microphone. That pretty much sums up the entire layout of the phone. Oh yeah, in addition to that, the POCO M4 Pro comes in a total of 3 colours, notably “Power Black” (the one I have in my hand now), “Cool Blue”, and the iconic, classical, and signature “POCO yellow”

And you think I’m over with the camera of POCO M4 Pro? Nah my fams. Now I’m just about to talk about the camera functionality and features. So what’s so special about the camera I hear you eagerly say? Well, let’s just say pics taken with the portrait mode are crystal clear. Now I know I kinda overused the word crystal clear (okay fine that’s what my accounting lecture always tells me when she teaches, it kinda subconsciously gotten into my head) but hear me out! In portrait mode, the POCO M4 Pro could capture the essence of any pictures to the brim and I’m not even exaggerating. This is the real deal I mean take a look at these portrait pics :

Ain’t lying right? Now you’ve seen the portrait pics, let’s have a look at the normal pics taken in its default settings glory. I’ve noticed that all the photos taken in the default settings will auto-adjust to their best presentation. Which is a good feature especially for seasoned vloggers, and even journalist like myself. Here are some samples are taken:

All these pics were taken during the evening time, a “golden hour” where the lighting strikes a perfect balance between light and dark. Yet even with the most common default settings, the POCO M4 Pro is still able to capture everything in full detail with no issue at all. Not even when it comes to zoomed-in shots. Since we’re done with the rear camera, let us test out the front camera, shall we?

As you can see, even the front camera has no issue when it comes to selfies. Making it one of the perfect tools for influencers. (Not me obviously).

Oh, and before we move on, let’s have a talk about the video. For the most part, the POCO M4 Pro is able to capture video at 1080p 30fps with no issue at all. But that’s all about it because it is capped at 1080p 30fps and would not go beyond. But overall, still pretty good if you ask me. Here’s a sample of the video :

Of course, I couldn’t miss out on the basics, the POCO M4 Pro uses the AMOLED display and has a 6.60 inches screen with a 20:9 aspect ratio, pretty standard. It should be added that the phone also has a 90Hz refresh rate as well as a 180Hz sampling touch rate which is pretty responsive for a budgeted phone. If you are a person who by some odds, often drops your phones on floors, then fret not because the screen is composed of Gorilla Glass 3 (well still, applying an extra layer of screen protector is still highly suggestible). Of course, as mentioned beforehand, the phone itself could only capture video up to 1080p and 30fps, thus watching any video that is higher than the cap limit will cause a bit of stagger from time to time. Overall the display quality could be wrapped up as vibrant, and clear cut.

Audio-wise it was pleasant, it has 2 stereo speakers and emits 24-bit/192kHz of audio capacity, with no static or any issue that rendered the phone unbearable. Unless you decided to crank the volume all the way up to the max which in that case, you’ll start hearing some flaws that kinda make your ears feel uncomfortable. But hey, again, the audio performance is still very decent, as long as you don’t blast any clubbing music.

Alright, let’s address the elephant in the room. I know why you all are here for, and oh boy I got some news for you all. Let’s start off with the benchmarking.

As you can see, the POCO M4 Pro could optimize to a rather satisfactory level which is not too shabby for a phone catered for the budgeted mass audience. To break it down for you all, the POCO M4 Pro is running on MIUI 13 and Android 11. The chipset that powered POCO M4 Pro is Mediatek Helio G96. One thing to note is that Mediatek Helio G96 itself also powered various other mid-high-end smartphones, easily making the POCO M4 Pro on par with those models when it comes to processing. Furthermore, it also has an Octa-core (2×2.05 GHz Cortex-A76 & 6×2.0 GHz Cortex-A55) central processing unit.

Oh and the model I’m currently having on hand has 128GB of internal storage and 6GB+2GB of RAM (Which technically makes it 8 RAM since the system will extend its RAM by 2 during heavy optimization). With that being said, everything is running smoothly like butter.

Now let’s move on to gaming performance. One thing that surprises me the most was that it has no overheating issue. the fact that I’ve been gaming on the phone for an hour doesn’t make it feel like it wanna burn my hands. Well of course provided that you’re playing Esports-oriented games such as Call of Duty Mobile, Mobile Legend, and PUBG. But when it comes to high-resource games like Genshin Impact, it will definitely cause the phone to heat up just a little but not to a point where it’s burning. In fact, it was only slightly warmer than usual. There are no issues when it comes to Esports oriented games, everything is smooth sailing. But as for Genshin Impact, you’ll have to set the settings to the lowest resolution in order to let it run with no issues.

Well as for the battery performance, the POCO M4 Pro has a decent 5000mAh of battery life and the best part is, it actually takes a rather surprisingly long time for the battery to deplete. Like seriously, even when I was playing COD Mobile with other background apps active in the background, the battery level only went down like 5-7% within a 30 minutes span. This may not sound impressive to some of you but honestly, for a budget phone to achieve such long-lasting battery life is tremendously outstanding. Also if you leave the device alone and do completely nothing, it could last up to 5 days straight with only 13-15% of the battery depleted. So you really wouldn’t need to be concerned about the battery life.

To sum it up, the phone does support 33W fast-charging, and all you need is just less than an hour of charging for it to reach 100%. Impressive speed I gotta say.

After tweaking it around for a few days I find myself having more favorable views than any unfavorable. That being said I really enjoy using it as it’s efficient, responsive, and it has a very decent display. Okay aside then the video capturing capacity, don’t let that discourage you because it has more pros than cons. The device also supports Wi-Fi 802.11 a/b/g/n/ac so you won’t have any issue with Wi-Fi connectivity. If you’re a single-handed user, there’s a single-hand mode available through MIUI 13. Remember for a price of RM899 (6GB+128 GB version) it’s considered a great productivity device. Of course, the POCO M4 Pro has a 5G variant which you could consider by topping up a bit more money. But if you’re on a tight budget, you could consider giving POCO M4 Pro a good go as I do suggest trying it yourself. Its’ Jordan approved for me!