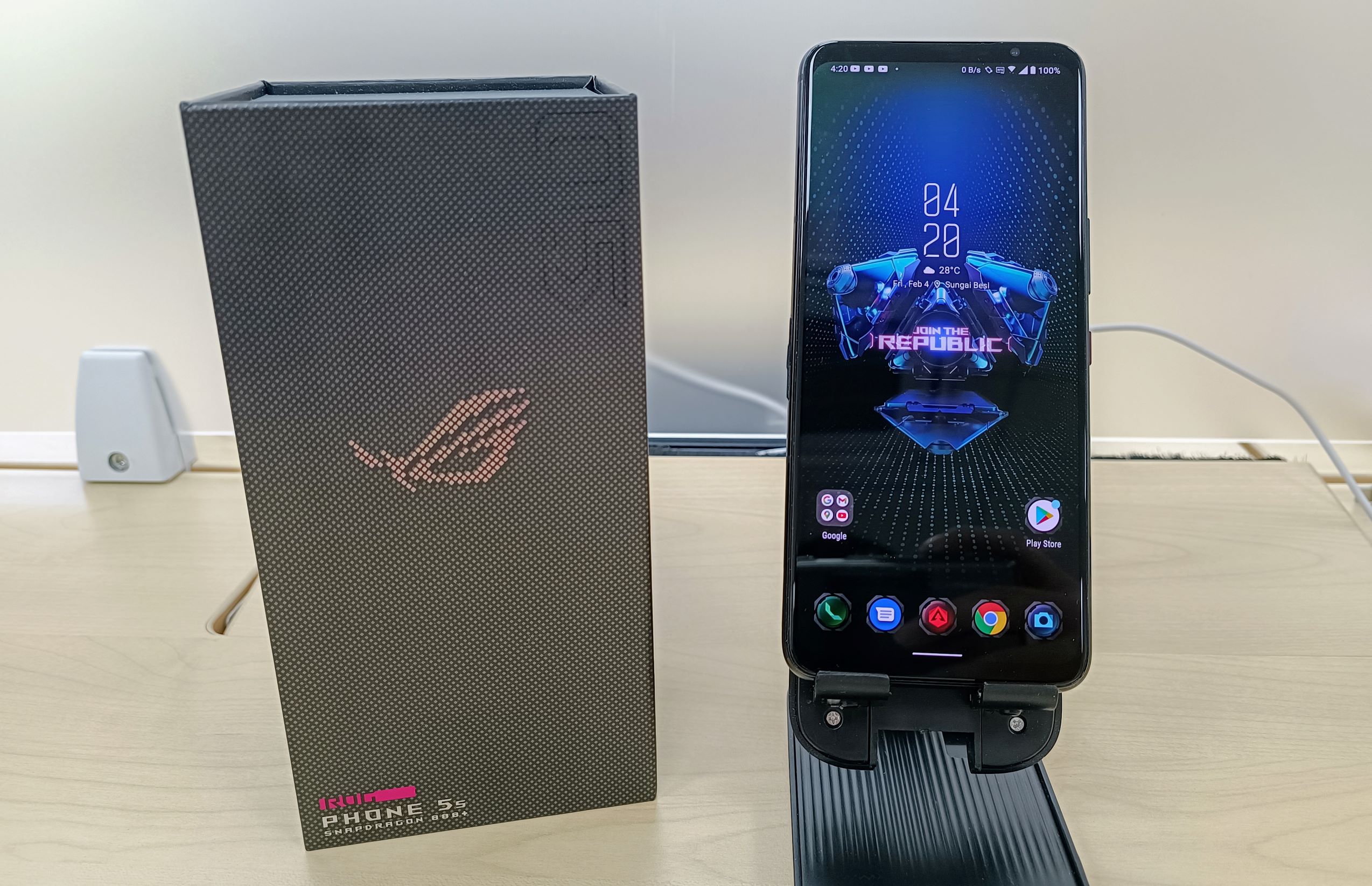 It screams I wanna game it all the way

Any brands today is trying to attempt on creating and fitting everything in a phone, and usually gaming oriented phone is one of the focus that brands are trying to sell. One of the phone that we will be taking a look and review is the ASUS ROG Phone 5s, a phone that does fix all your gaming needs, and of course being a phone, it is doing what a phone does, and more.

The ASUS ROG Phone 5s design is built on an all metal material design candybar over the sides while on the back is a mix of glass that gloss over the phone with Gorilla Glass 3. Overall it is weighted at a hefty 238 grams which is a real heavy device even for a flagship device which makes someone has to be real careful while handling and operating with the phone. But design aesthetic wise, especially if you are a gamer, you will definitely love it with its back of the device, you will spot RGB LED’s which you can easily configure it with the Armory Crate App.

Upon unboxing the phone, this is a premium packaged with something more to it. After setting up the phone, if you launch the Armory Crate App, you will be able to use the AR function and get to see Akira and its story, which is a character in the box which ASUS makes great effort to appreciate the ROG phone owners.

As this is a very high tier device, it’s expected that you get everything to start except for earphones and USB C to 3.5mm converter. For that you can purchase it anywhere or you can take a look at the massive accessories range from ASUS from coolers to the Kunai Gamepad which you might be interested as a complete set of mobile gaming gear.

Over on the sides, on the right hand side, there is a power button followed by Volume UP/Down buttons while on the left side there is a SIM Card/MicroSD card slot with slightly on the middle there is an additional USB C port and accessories pin ports for charging and attachments. If you look closely on the left side top and bottom, you will spot a pair of pressure sensitive virtual triggers which acts like L1/R1 like your traditional game controller, giving additional access just like playing on a console with games such as Asphalt 9 and Call Of Duty Mobile. The bottom portion houses the microphone, USB C slot for data and charging and a 3.5mm headphone jack. Over on the top part of the phone there is a microphone only.

The ASUS ROG Phone 5s comes in two colors, Phantom Black and Storm White which carries the weight of 238 Grams. Although it is heavy, but gaming phones are built with such nature to provide proper cooling solutions inside and it will be still comfortable to hold as all the sides of the phone are rounded edge in a balanced manner.

When talking about the display of the ASUS ROG Phone 5s it is powered by a 1080 x 2448 pixels, 144hz, 6.78inch AMOLED 1B HDR 10+ Display which brings vibrant beautiful colors that is further protected by the Gorilla Glass Victus with density up to 409PPI that does not disappoint anyone. It also can peak up to 1200nits of brightness, meaning that you will still able to look at the screen even under bright sunlight. If you love to watch movies and listen music with the phone this will be a good choice for you as it is equipped with a pair of front facing stereo speakers on top and bottom of the device with video streaming up to 1440P. Browsing and social media with it is business as usual with up to 120FPS while gaming can Max up to 144hz with 1ms response rate.

When it comes to the camera setup, the ASUS ROG Phone 5s rear camera consists of one 64MP camera with PDAF, one 13MP ultrawide camera, 5MP macro lens, followed by a single LED flash. While the camera is definitely not flagship class, pictures taken were clear during day with good amount of light and clarity produced on each picture with good color reproduction. During night shots, it came may produce high amount of noise on environment shots with sometimes just shadows but with not much of details produced accurately. The selfie images are bright and good during day time as well which is powered by a 24MP wide angle shooter.

A few shots were taken over different modes as above and the result are as above. A sample of 10x zoom, normal and automatic shots taken were balanced and based on the overall camera setup. Besides that other modes such as Macro shots mode are also supported over the rear camera.

On video recording you get support up to 4K at 60FPS, stutters are very minimal while recording but it’s with represented with good amount of details during recording, even walking slightly faster can still capture recording fairly stable although OIS is not present.

When looking at the performance and hardware, the ROG Phone 5s is powered by the flagship range Qualcomm Snapdragon 888+ 5G Octa-Core Processor, up to 512GB of internal storage and whopping 18GB of RAM with Android 11 enhanced by the ROG UI which comes with Armory Crate app and Game Genie that allows you to customize your game quality, performance settings, RGB light customization, framerate, and the pressure sensitive side triggers.

Call quality test is clear thanks to the inclusion of VOLTE & WOWIFI that is supported on all Telco Carrier. The phone does come with full 5G connectivity support average tested at 165Mbps (4G), WiFi 6, Bluetooth 5.2. Testing over WiFi connection gets up to an average of 2000MBPS local transfer speeds, which is good enough for social media upload and streaming.

Over to the gaming side, basically this phone will perform well on games such as Mobile Legends and Call of Duty Mobile with low mix medium settings applied and with such good lightweight feel on it. With Armory Crate, you can also monitor your game FPS information or even setup your in game recording to capture all you winning moments.

Above is the Benchmark performance, which delivers an excellent top scores on each of the test between its graphics, and processor performance. The ROG Phone 5s is suitable for those seeking for a device that does all that is designed for gaming, some social media post, your day to day work, call and entertainment companion. eSports and flagship game titles will have absolute no issues with its powerful Adreno 660 GPU, one of the best that you can look out for today.

Battery performance wise, you will get around 11 hours of it, a mix of calls, surfing, email, streaming, and a few Mobile Legends matches with brightness set to 50%. Turning on the battery saving mode under 20% will get you around extra 3 hours of conservative usage. The ASUS ROG Phone 5s comes with a 65W fast charger and built in 6000mAH capacity battery, which will charge up the phone to 60% from 10% in around 40min average.

The ROG Phone 5s is a device that is first objective who are seeking for a flagship that does gaming by all means, followed by a very powerful communications and work device that seems to be able to last the whole day with its large battery capacity and fast charging capability that is well suited for someone with a busy and productive life with gaming and entertainment combined into one. We would strongly recommend this device and personally with such SOC built in, one of the fastest Wi-Fi chipset built around it, we are sure that this is another candidate that you surely can consider to feast all your needs.

As of this writing of the review, the phone is selling at the street price of RM2700 with its 8GB RAM, 128GB storage configurations from various online and ASUS outlet dealers.

For more information on the ASUS ROG Phone 5s, Visit here to find out more.

Calling Family from afar with the Galaxy A13 5G