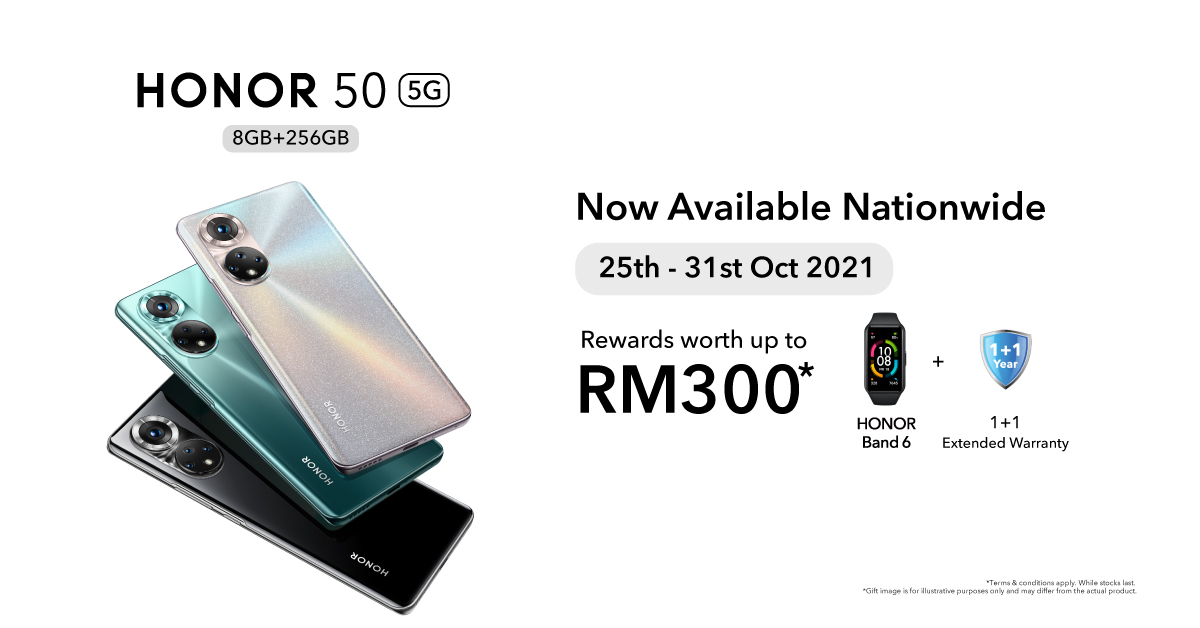 The HONOR 50 has been taking the headlines recently, with people wondering how vlogs are capable in being elevated to a new fun and creative level. 20 Malaysian stars had their day with HONOR 50 one-stop vlogging experience.

The badminton darling of Malaysia, Goh Liu Ying gave us an insight of the HONOR 50, using the fast and slow-motion recording feature to capture her badminton training, with the quick smashing action and audio clarity a rare sight. Goh expressed her joy, “After using the HONOR 50 for a few days, I found that vlogs can be made simple! My recordings are not interrupted while I switch the camera mode, while the various Multi-Video modes allow me to shoot more contents from different angles.”

Fashionista Ally Mukhriz took the HONOR 50 for a spin on a “insta-cation” vlog, showing us the fun side of her away from the limelight. Ally said, “It made vlogging super effortless and seamless. I can switch video modes while I’m still filming without editing or pause. The best thing about it is the front and rear view features, how you’re able to film both, which is my favorite part!”

Malaysian entrepreneur, Bella Kwan took the HONOR 50 on a Sunday ride, showing off some insane skateboarding skills through Dataran Merdeka and some dinner with friends. “The multi-video feature is able to capture so many footages in different angles and different ways in one take especially with the dual camera function. It’s something I really enjoy, and I hope you guys enjoy watching it and some time off to head to KL” said the co-owner of Handmade Heroes.

Malaysian actress Jojo Goh gave us a page of her diary titled “Mixed Fried Rice Day” as she takes the HONOR 50 in vlogging her day going through hang outs with friends, into the recording studio and just settling down at home. Jojo said “My day has been captured by HONOR 50’s multi-video function that gives the smooth and seamless switch between different camera modes without pausing or stopping the video. What I like most about it? Convenience and efficiency”. Jojo then added a fun poke at the end by mentioning she does not need to add any major editing mode into her “fried rice recipe”, indicating how suitable the HONOR 50 is to her.

The flexibility of HONOR 50’s vlog modes allows an easy access to vlog! It comes with six multi-video modes, including Picture in Picture, Fast and Slow Motion Recording, Dual-view Recording and Pause Live Recording, giving a continuous vlog shooting without the need of any tedious post editing, giving that Wonder in One Take. By having the 108MP ultra clear main camera, and 32MP HD front camera, both professional and upcoming vloggers can now produce a quality content vlog!

HONOR Malaysia’s best vlogging smartphone, the HONOR 50 comes in 2 versions, with the 6GB RAM + 128GB storage priced at RM1,699 in 2 color choices of Midnight Black and the limited-edition HONOR Code, available only for purchase via various online stores.

The 8GB RAM + 256GB version is set at RM1,999 that comes in 3 color modes of Frost Crystal, Emerald Green and Midnight Black, while is available stocks last via various online stores and HONOR Authorised Stores nationwide.

Fans who are planning to get their hands on the 8GB + 256 GB of the HONOR 50 will get themselves rewards worth up to RM300, while rewards up to RM 120 awaits for those getting the 6GB + 128GB version.