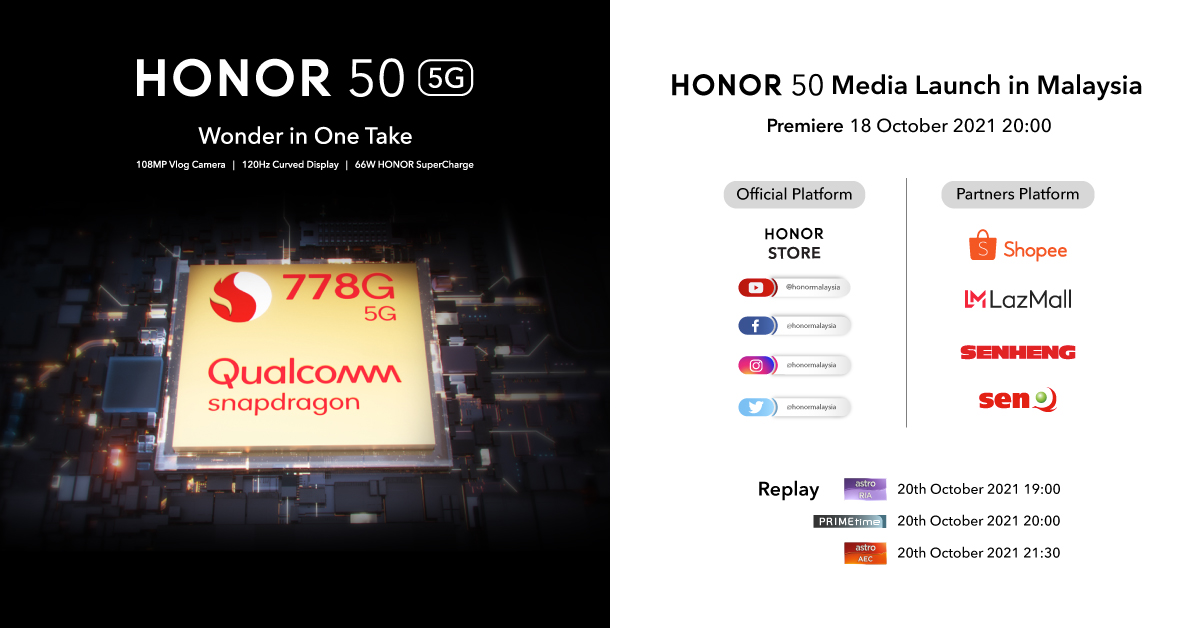 The countdown for the much-acclaimed HONOR 50 starts tonight at 8pm, with Malaysia taking the honor for being the first country to launch the smartphone outside of China. Fans are determined not to miss the official launch livestream of the HONOR 50 coming October 18th, 8PM.

HONOR does not play around when it comes to performance, working alongside the respectable name of Qualcomm to bring in the Qualcomm Snapdragon™ 778G processor, giving a flagship-level performance that is much desired. As such, both the CPU and GPU performance has been increased by 45% and an increased AI performance by 123%. Further boosted by the innovations of the GPU Turbo X, high-end graphics can now be enjoyed in your favorite mobile games, accelerating the gaming experience to ensure the HONOR 50 unleashes a faster for smoother gameplay.

Thanks to the 4300mAh battery, the HONOR 50 has a battery life that long-lasting, further juiced up by the 66W HONOR Wired SuperCharge – powering up the HONOR 50 to 70% from zero in just 20 minutes, removing worries of running out of battery. A safeguard measure has been taken to ensure a safe charging, with HONOR implementing the triple identification to detect if the charger, battery and cable is made by HONOR, thus minimizing the charging failure rate. The safety mechanism allows fan to have a sigh of relief when it comes to the safety of fast charging experience.

The fun and hype continue for the HONOR 50, with a media launch livestream on HONOR Malaysia, Era and HITZ’s Facebook page at 8pm tonight. Join the hype train to see what the HONOR 50 has in store!