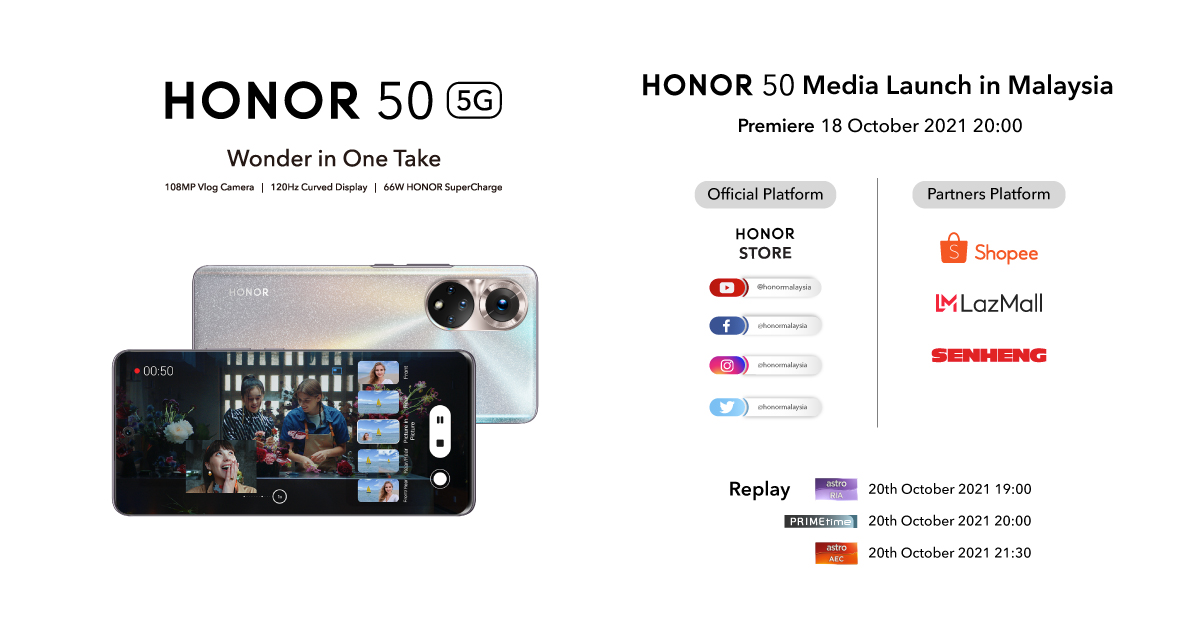 With the digitalera now the real deal for content creation, people are demanding for a capable tool that captures wild moments with minimum set up for convenience, pressing the button and sharing it with the world. HONOR Malaysia is ready to give fans a wild smartphone vlogging experience in just one take, in the shape of HONOR 50, as it claims to be the best smartphone for vlogging this year.

Aiming to give fans the premium experience of sharing video contents of their surroundings, video loggings seem to be the ideal way of telling the world what we do, in a raw, realistic and fun way to express what we felt in that moment. That’s where the HONOR 50 scratches that grow.

HONOR 50 – Six Vlogging Modes for all the fun

Equipped with the Multi-Video Recording and six vlog shooting modes, the HONOR 50 is suitable for various vlogging methods, giving creativity a fun way to play around. Fans can now click to record and shoot with multiple camera angles at the same time, producing interesting vlogs to minimize editing after records.

The Dual-View Recording activates the front and rear lens to record simultaneously, with the help of a dedicated button. This gives the perfect view for parents to capture photos or videos of their growing toddler walking or grabbing toys around home, with the baby’s action and the expression of the mom and dad clear to see. Dates can now be fun too! Lovebirds can now take a photo of themselves and their partner with a single button, capturing a romantic dinner in one-take. With a single view, the expression of two people or more, can be seen clearly.

The Picture-in-Picture Recording feature gives a freedom of maximizing the overlay of the front camera for a bigger view, suiting travel vloggers who are now capable of recording themselves and their journey in one shot at a time! Gone are the days of rotating your vlogging camera!

Maximizing the potential of both the rear lens, the Dual-Rear-View Recording gives a flexible option of capturing panorama on one while zooming and emphasizing on the other rear camera. Vloggers can now capture the vibe of the café they’re hopping with the left lens, while the right lens takes care of the travel partner enjoying a good old morning mocha with clear details. Capture anything – sports events, outdoor tracks, even dancing, the possibilities are endless!

HONOR itself created a special feature in the name of the Fast and Slow-Motion, giving a speed up to 4 times and a slow-mo of 0.5, including sound capturing synchronously. Indeed, a slow motion in one-take at any time! You can now capture hard core and fast paced happenings, and whenever you want, tap for a slow-mo or speed up. Just think about how wild you can capture a friend’s party! Feel free to chip in any editing skills for desired effect.

The Front to Rear Recording takes vlogging back to the classic days, with a modern twist. Vloggers can now seamlessly switch the recording from the front or rear camera anytime, giving talking preference and the change of scenery with ease. Thinking about food vlogging anyone?

To top off the six, the Single to Dual-View Recording allows switching from the front single-lens to the rear dual-view camera without pausing your recordings. Vlog your contents worry free and switch to the front or rear camera in your wildest content imagination! Long gone are the days of missing that golden moment!

Vloggers and content creators are sure not to miss out the best smartphone for vlogging, with the HONOR 50 sets for a media launch livestream on HONOR Malaysia and HITZ’s Facebook page at 8pm on 18 October 2021. Don’t miss out to see what the HONOR 50 has in store!