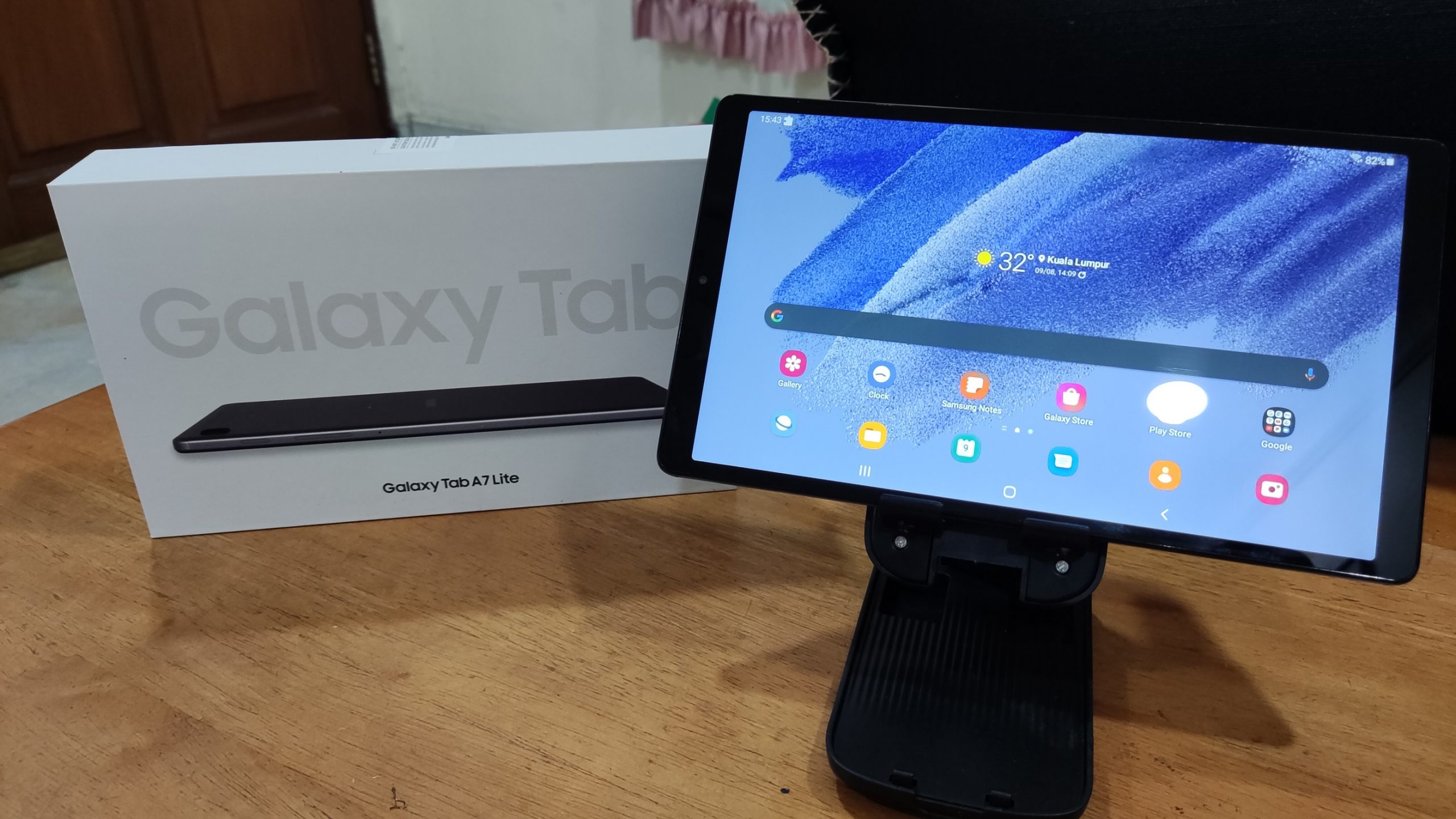 Tablet right on the budget !

Tablet has been a norm these days, especially since we live in an era where it is considered as one of the important tools for work, play, entertainment and education. With the rise of work from home culture, it is slowly becoming essential in order to improve an individual’s productivity.

Today we will look at the Samsung Galaxy Tab A7 Lite, a tablet meant for everyone, really 🙂

The Galaxy Tab A7 Lite back is built almost entirely on a metal chassis, which feels similar to the Galaxy Tab A7. Looking on top of the back the tablet comes equipped with a single 8MP camera lens.Touching the back portion of the tablet gives a smooth texture to it, and don’t worry, not a fingerprint magnet. Over at the front screen of the tablet there’s one selfie camera for video use, or just to snap selfies. Overall the color blends pretty well. It comes in 2 colors, Gray and Silver.

The bottom of the tablet you will spot the speaker, one USB C port and a 3.5mm headphone jack. Over the top you will spot a speaker placement. Specifically on the speaker, when playing music, streaming or games, both bottom firing speakers and the top speaker will work together, giving it a stereo experience surrounding it. Over the left side there is a MicroSD card tray which can be expanded up to 256GB while on the right side there is a Power button, volume button and another microphone.

Over the display front, the Galaxy A7 Lite features a 8.7 Inch TFT LCD 9 screen that carries a resolution of 800 X 1340 HD+ display. Display is fairly normal, clear, colors were a bit washed out but overall contrast is okay. Such displays will work well when it comes to gaming, normal streaming, email replies, social media, study use, video conferencing and as an e-reader.

The Galaxy A7 Lite comes equipped with 2 cameras, One 8MP camera on the rear and one 2MP on the front. The rear camera produces shots what it should be, with normal contrast, normal average color accuracy and subpar details on it. Over to the selfie camera side, do not expect great pictures, however it does the job well as a front camera as a webcam for video conferencing and online learning. Below are the samples of various environments taken. Rear camera wise over video mode, it can capture up to 1080P at 30FPS

An affordable tablet does not need a very powerful processor, but make no mistake, the Galaxy Tab A7 Lite comes equipped with MediaTek Helio P22T Octa-Core processor running at 2.3Ghz, 4GB of RAM and 64GB of internal storage. Day to day use with the tablet has been a joy, which comes with the One UI 3.1 Core (Lite) Android 11. Such updated OS ensures that almost all Google Play Store applications and games are compatible.

Over to the gaming side, the tablet performs OK only, don’t expect it will run very intensive games such as Genshin Impact, however we make a small list of games that will run well with it.

Benchmark performance meets expectation, delivering low tier range performance as shown below. Such a score is acceptable as a work life balance device on a budget oriented tablet. But if you need it for serious multitasking, you may need to consider its bigger brother, the Galaxy Tab A7.

Battery performance wise, you will get around 6 hours of it, a mix of video calls, surfing, email, streaming, and a few Mobile Legends matches and Asphalt 9 . Turning on the battery saving mode under 20% will get you around extra 2 hours of conservative usage. The A7 Lite comes with a 7.5w charger which will roughly charge up to 100% in about 3.5hours time frame. But optionally could just get a 15w charger which will cut the charging time by half

The Samsung Galaxy A7 Lite is a suitable device for those who are looking for a budget oriented affordable tablet as a start for your kids, work from home tool and as a secondary movie streaming tablet. At RM699, it can’t be wrong to choose this as your starter tablet that is able to multitask and to keep most of your productivity going.