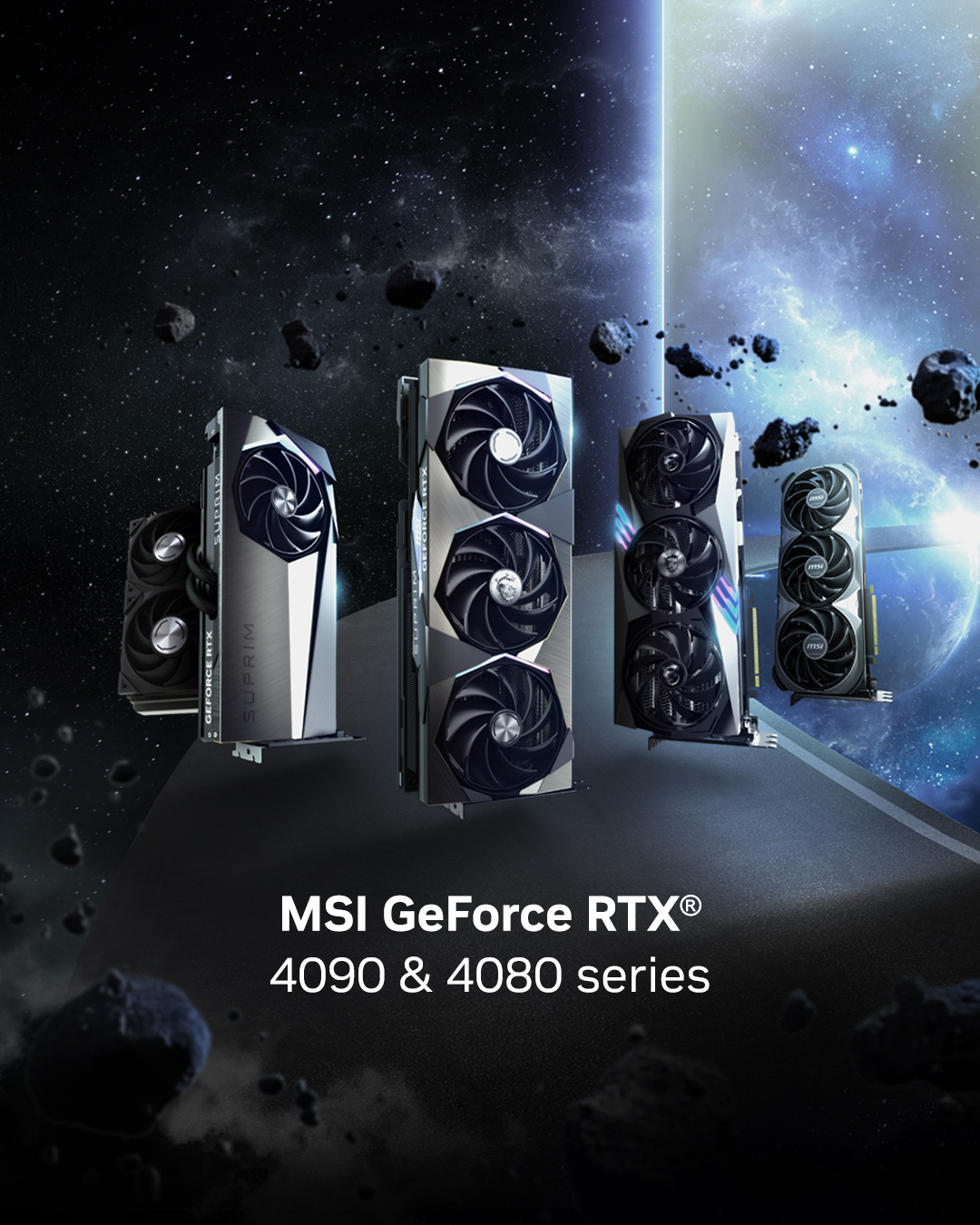 MSI is delighted to announce its take on NVIDIA®’s new GeForce RTX® 4090 and RTX® 4080 series GPUs as a leading brand in True Gaming hardware.

The third generation of RTX®, GeForce RTX® 40 Series graphics cards is incredibly fast because of the new ultra-efficient NVIDIA Ada Lovelace architecture, enabling artists and gamers a quantum increase in performance, neural rendering, and many other cutting-edge platform features.

SUPRIM cards are intended to maximise performance, efficiency, and prestige. Heat is effectively dispersed from important board components with TORX FAN 5.0, up to 10 Core Pipes, Airflow Control fins with innovative Wave-curved 3.0 edges, and air antegrade fins while using MSI’s most sophisticated air conditioning system, TRI FROZR 3S. The vapour chamber is at the core of the RTX® 4090 and RTX® 4080 16G-based models, whereas the RTX® 4080 12G-based model has a huge nickel-plated copper baseplate.

Brushed aluminium on the cooler’s exterior and backplate lend an armoured appearance while strengthening the card’s length. RGB Mystic Light has millions of hues and a plethora of configurable dynamic lighting choices that will captivate onlookers. With Dual BIOS, customers may rapidly choose between minimal noise and increased performance with the flip of a button.

This generation of the SUPRIM series will also debut a variant known as SUPRIM LIQUID in addition to the air cooled variants. This series, which is only offered on the GeForce RTX® 4090, uses a closed-loop liquid cooling technology to keep temperatures even lower and enable higher performance levels.

Two MSI Silent Gale P12 120 mm fans, which are intended to deliver powerful air pressure at incredibly low noise, are used to cool the 240 mm radiator. The power delivery components are kept cool more than adequately by a single TORX 5.0 fan mounted on top of a special heatsink.

GAMING TRIO has been updated with a new TORX Fan 5.0 design, which has pairs of three fan blades joined together with an outside link, providing a rim that directs airflow into the improved Tri Frozr 3 cooling system. The RTX® 4090 and 4080-based variants used a nickel-plated copper baseplate as the heatsink’s core.

The new GAMING TRIO series also includes a Dual BIOS for simple switching between Silent mode and Gaming mode for increased performance. A brushed-metal backplate with a flow-through design strengthens the graphics card while also offering passive cooling through thermal pads. Mystic Light covers the graphics card’s outside, lighting colour in rhythm with the rest of the PC through Mystic Light Sync and Ambient Link. These new GAMING TRIO cards are rather large, with the RTX® 4090-based model taking up 3.75 slots and the RTX® 4080-based model taking up 3.25 and 3 slots, respectively.

The popular VENTUS series is back, with three award-winning TORX 4.0 fans. This graphics card is suited for any setup thanks to its powerful cooling system, strengthening brushed aluminium backplate, and well-rounded design. The two remaining RTX® 4080-based VENTUS 3X models, being the most modest series, are even thinner at 3 and 2.5 slots, respectively.

SUPRIM, SUPRIM LIQUID, GAMING TRIO, and VENTUS will be at the forefront of MSI’s GeForce RTX® 40 series lineup, but additional series are on the way.

More information about these new MSI graphics cards can be found on the official MSI websites :

MSI will also provide an exclusive detailed first preview of the new series during the upcoming Insider livestream on Wednesday the 21 of September @ 22:00 Malaysia/Singapore.