A Business Born Out Of Passion – A XIAOMI Fan Story 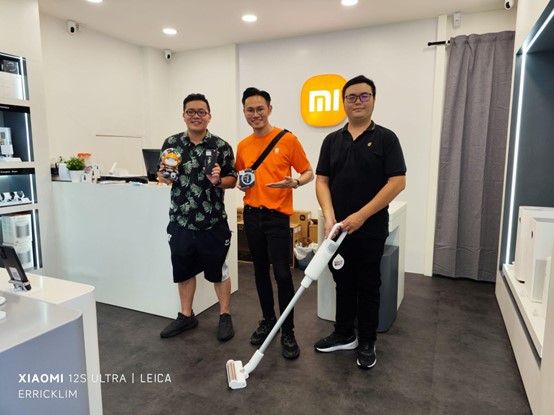 The core of Xiaomi’s company culture is centred on adopting its values through forging genuine connections with people and including them in the company’s future plans. By building his very own Xiaomi Shop-in-Shop, Mr. Errick Lim, a Xiaomi enthusiast turned business owner, recently fulfilled a lifetime goal.

Nicolas Shi, Country Manager of Xiaomi Malaysia and Singapore shares, ‘Our adrenaline is fueled with passion when we witness the story of our Xiaomi fan turned business owner who set up his very first Xiaomi Shop-in-Shop after 7 years of hard work. We are delighted that we can be a part of his journey and help more users to have easy access to Xiaomi products in Kluang, Johor.’

The Xiaomi Community has been an essential part of the Xiaomi brand since its inception. Through a common experience of engaging and living with all of these cutting-edge products that have genuinely life-altering intelligent features, Xiaomi fans and users have become connected. Thousands of fans have already shared their own tales on how the Xiaomi brand and products have improved their lives in the global Xiaomi Community.

Errick, a 34-year-old entrepreneur from Kluang, is a Xiaomi Technologies official retail distributor in Malaysia. After earning a diploma in computer engineering, Errick began his own business selling laptops in partnership with a few of his college friends. He didn’t begin his first work with Xiaomi until the Redmi Note 3’s launch in 2015.

Errick opened his own smartphone dealership in 2015 with a strong emphasis on Xiaomi products, motivated by the words of Xiaomi CEO Lei Jun: “Always believe something wonderful is about to happen.” Now, seven years later, Errick has established his own Xiaomi Shop-in-Shop.

Errick began by narrowing his online sales channels, with Facebook Live serving as his main sales channel. “Back then, it wasn’t very common for businesses to sell on Facebook Live and I was amongst the first few online sellers that did that. I believe in promoting the products online because it helps customers to understand the products better. Looking back, I am glad to have been able to leverage the platform to push for content and sales which has helped me in sustaining the business for the past 7 years,” Errick shares.

Errick has been a fan of Xiaomi since the company’s MIUI operating system debuted in 2010. After earning his degree in computer engineering, he had a natural affinity for everything related to smartphones and technology. Being an engineer, Errick enjoys booting good operating systems onto his smartphones. This is how he first learned about the brand. “I have faith in Xiaomi’s products for its value-for-money proposition. My mission aligns with Xiaomi’s in making quality technology accessible to everyone, as well as becoming a cool brand for Xiaomi users,” shares Errick.

Of course, difficulties must be overcome in order to succeed. Errick, like other companies, suffered during the economic depression brought on by the pandemic; it was the most difficult struggle he had ever encountered. Fortunately, he was able to maintain the business despite the statewide lockdown because he was able to secure online sales, just like Xiaomi did when it first started.

Errick is especially appreciative of the help he received from his group of colleagues, friends, and family, all of whom have blended into his life. In particular, during the Movement Control Restriction (MCO) two years ago, he is appreciative of the inspiration they have given one other at the most trying times.

“I want to focus on building my business foundation and continue to supply Xiaomi products to everyone in this community, to help them start a smart living with better technology,” Errick shares. By building a strong foundation, Errick hopes to keep his business viable and eventually grow the store. As more customers switch their social channels, he has ambitions to expand the company’s channels into Tiktok and Youtube.

Errick encourages Xiaomi Fans and users to follow their dreams and to always believe something wonderful is about to happen.