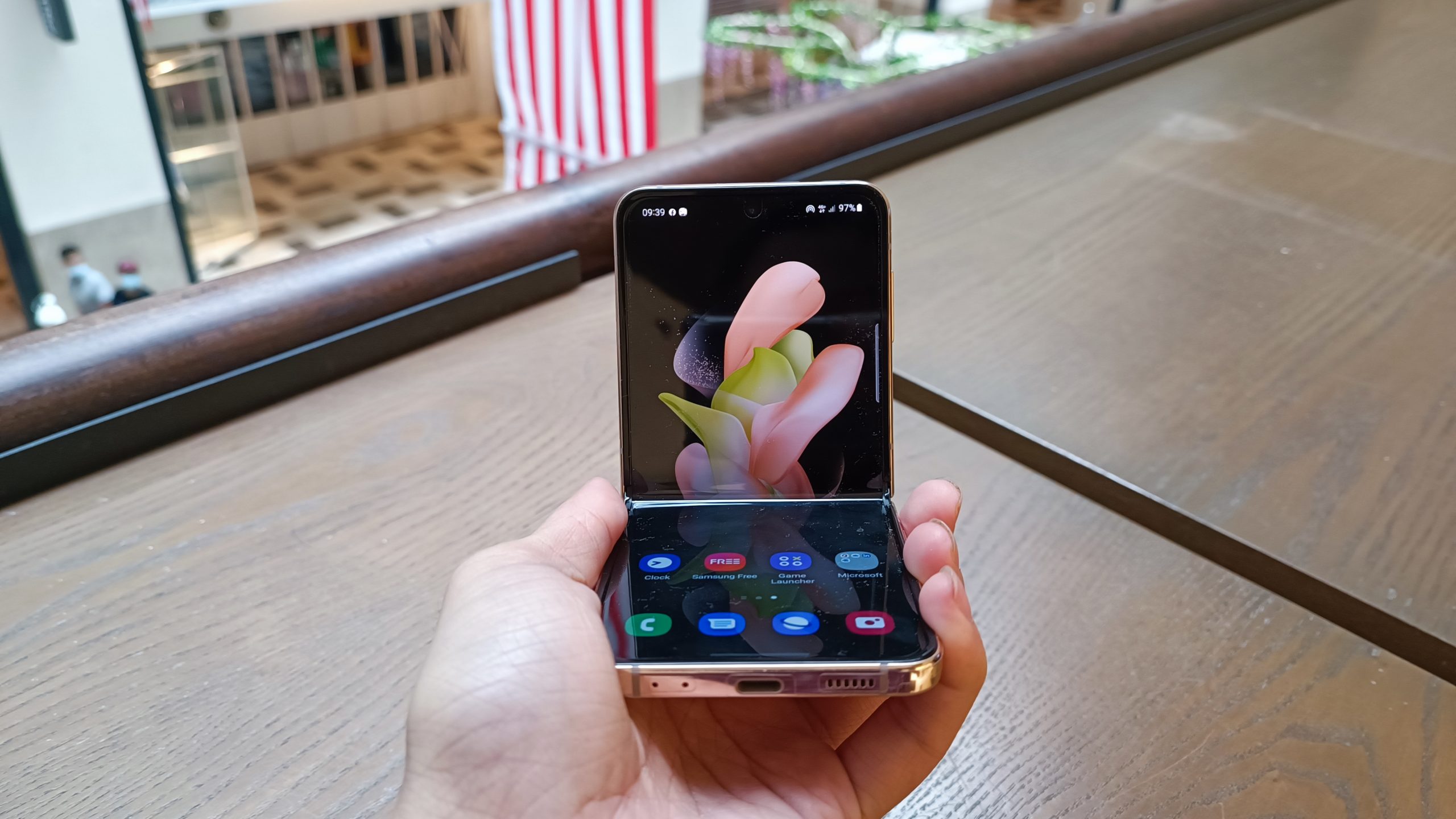 If you have not read our unboxing and first impression, click HERE.

Over the years, Samsung is one of the well known Smartphone company that never stop improving, even towards their normal looking everyday S and the A series, the same can be said on this year’s Galaxy Z Flip4, which we find some of the upgrades to keep the foldable phone market fresh, updated and still remains relevant.

Let take a dive in to the full review of the Samsung Galaxy Z Flip4, a foldable that speaks fashion, functionality and improvements.

The very base design of the Galaxy Z Flip4 is still based on what you have seen on the Galaxy Z Flip3 last year. One major differences is the thinner bezels over the screen, while the overall dimension is slightly compact when folded, making it folding and unfolding the phone convenient for the user, not to mention this also easier and friendlier storing in to your pocket or bag. The Samsung Galaxy Z Flip4 is weighted at 187 Grams which is heavier than last year’s model but when holding side by side, the weight is similar.

Looking deeper towards the sides that is holding the phone strong as a single foldable phone seems to be designed in a flatter tone but still holds a reasonable grip over day to day usage, however if you are feeling uncomfortable, you may take a LOOK at the new variety of case design from Samsung’s online store.

However do take note that one will still need to unfold the phone with two hands, whether it is with the protection or not, as the armor aluminum frame although it is an upgraded one, I still will use 2 hands to open it, as it’s slightly tighter when unfolding and this could be Samsung’s approach in strengthening the device well to keep the longevity of operating the phone.

All of the button placements and positions of the phone remains the same as a carry on from the Galaxy Z Flip3 with an exception of the both of the display glass protection is upgraded to Gorilla Glass Victus + and IPX8 rated for water protection, but not dust protection.

This is one of the important portion of the Samsung Galaxy Z Flip4. Lets begin with the displays, as we all know, it has two displays. The 1.9 inch cover display shows the most important thing over your notifications such as calls, messages, apps that supports the cover screen notification, music player control, time, calendar and events. This additionally also adds support customising your own emoji and wallpapers on your cover display with the clock styles. Of course you can also use the Cover Display as a display for snapping your photo via the rear camera, which is higher resolution than your selfie snapper.

OK, now to the unfolded display, which looks slightly taller hosts a 6.7 inch 120Hz Dynamic AMOLED screen which can peaked up to 1200nits when set to manual mode, making it easy to read under bright sunlight but other than that, you get good color gamut, HDR10+ usual support which you still can find over the previous Z Flip3 5G phone. The Dynamic AMOLED display now can dial down as low as 10Hz when not interacting with it, giving it a great advantage on power saving and energy conservation to keep the usage longer. The crease which is located in the middle of the display is still there, but once you get used to it, not a hindrance at all.

Audio wise, it seems that the pair of speakers combined seems to be slightly louder, crispier, with clear music and vocal when played loud with the inclusion of Dolby Audio and AKG tuning which supports the phone’s speaker, USB C Audio and Bluetooth Earbuds, which makes audio hearing on the richer side, don’t expect deep bass though on the phone speaker however you will still get a pleasant one with pre-set or customize your own equalizer.

Well, for this part, many may comment or argue that this looks the same as the previous ones, from the overview specifications wise, it does look very very similar, but there is some improvement on both front and rear camera.

Lets start with the rear camera, which hosts two 12MP modules capable of PDAF, OIS, Ultrawide and Wide capabilities, which may not seem much, but it is an improvement when it comes to images quality with Samsung’s upgraded NPU which enhances and analyses captured images. This bring good images during day time in most automatic mode test which is presentable and editable with the built in gallery or with a PC editing app. During night time, an amount of over contrast and noise were still present if the environment is dark but if there is light source surrounding it, pictures can be produce quite good also. Just don’t zoom in too much during night shots, you may lose some details. If you want to use it as a selfie camera with the Cover Screen, I would say this is the best selfie camera that one would enjoy snapping it.

Above is the image on comparing the previous Z Flip3 and Z Flip4 over the selfie camera module. The Galaxy Z Flip4 clearly shows slightly more details with tad bit brighter over the face and shows more colors to it, however skin area could be a bit soft otherwise it is really similar which we use the same camera settings when we took the shots. If you wish to take an even higher resolution shots for your selfie, using the rear camera as a selfie shot will give you higher quality photo.

Above is the sample of the rear camera video captured in 4K, 60FPS with audio that can be heard clear within recording environment, frame wise, if it is moving too fast, jitter still exist however its steady with the help of OIS and EIS. As usual these perhaps still can be improved with fixes and updates from the brand. Zooming still see quite good amount of details especially on alphabetical characters including signage. Overall this is a good vlogging candidate on both front and rear camera setup.

The Samsung Galaxy Z Flip4 is powered by the newest Qualcomm Snapdragon 8+ Gen 1 Octa Core Processor with 8GB of system RAM and up to 512GB of internal storage which is a major upgrade compared to the predecessor. Day to day performance especially from the battery life is improved as well with a larger 3700mAH battery which last you approximately 1 day over mixed usage of calls, social media, e-mail, and a few games.

Specific to graphical intensive games like Genshin Impact, this phone can take it on without a sweat now, with stable frame pacing in the first 30 minutes, and this marks a great improvement in thermals and cooling that now can be achieved on a foldable device with a flagship SOC.

OneUI 4.1.1 with Android 12L brings in several features and improvement. Among the notable hightlights are About Phone shows the device photo along with the status. Some may see no major overhaul, but overall under the Labs menu you can have more flexibility like allowing all apps open in a pop up view and Flex mode panel allow 2 apps to run folded upright even if certain app were not tested by Samsung yet but supported. Other than that Android 12L is really meant to be large screen and foldable friendly devices to run as optimised as they can. The Cover Screen can now do more with better support of adding in emoji animation on clock, and re-arrangement and expansion of more Samsung apps added with drop-down quite status menu for turning on and off certain functionalities like Bluetooth, Sound Profile or WiFi.

Above are the benchmark results which marks a flagship level performance points that is in your hands, folded and ready to go. However do take note again that the warm touch is still there after long session of intensive task, but again, it cools down fast and lesser on the speed throttles.

Samsung yet again has proved that Foldables are fun and cool on the hand, meanwhile you are having such performance wielded that lasts for a whole day and a phone is not just for work and play, it is a fashion statement and Samsung is committed in updating it’s Android OS and Security update for at least 3 years after launch, giving more compatibility towards more companion accessories like the Galaxy Watch5, Galaxy Buds2 pro and many other accessories to come, whether it’s from Samsung or other Brands. Stay tuned on other companion Samsung Galaxy Accessories review coming soon.

The Samsung Galaxy Z Flip4 is now available at a starting price of RM4,099. For more info, CLICK here to find out more.

OPPO A17 Officially Revealed in Malaysia at RM599