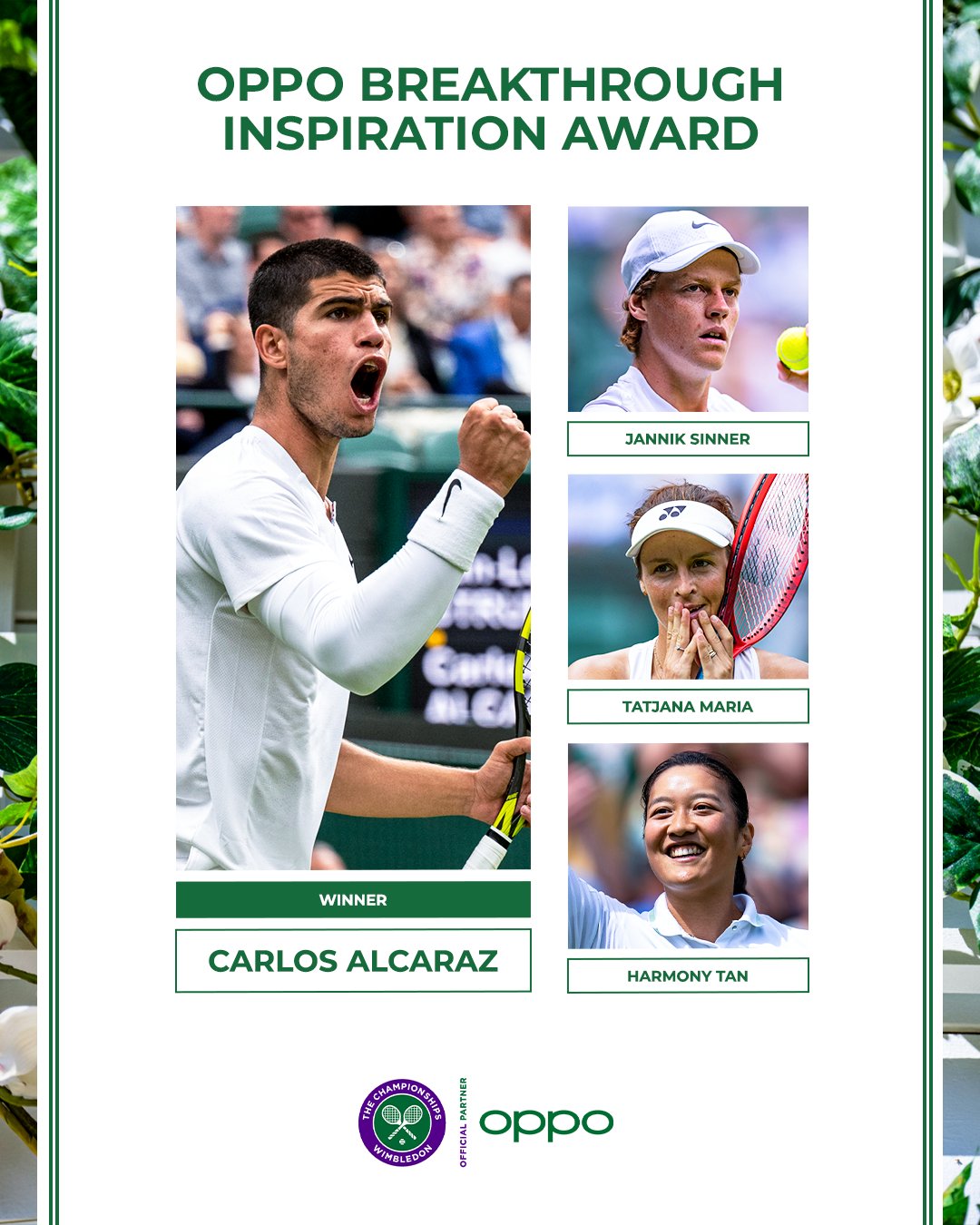 The All England Lawn Tennis Club and OPPO, Wimbledon’s global partner for the fourth consecutive year, recognise the outstanding fitness displayed over the course of the fortnight as this year’s Wimbledon comes to a conclusion. The winner of the OPPO Breakthrough Inspiration Award, Carlos Alcaraz, was announced today after attention was given to those who inspire not just the future generation of tennis players but also the spectators in the stands and at home.

The 19-year-old has won four ATP singles titles this year and is currently ranked at a career-high No. 6 in the world. He is hailed as one of tennis’ most promising rising stars.

This year’s award has received a rebranding to highlight recognising the herculean efforts of tennis players at the pinnacle of their capabilities. The award is tied to OPPO’s new brand proposition, Inspiration Ahead. Struggle and adversity are inevitable when competing against the greatest of the best, and the award honours individuals who overcame these obstacles to continue and succeed while maintaining a positive attitude.

“Inspiration Ahead means showing confidence and poise when we are moving forward. It encourages us to remain resolved and graceful as we brave the storm and break the stagnation. Participating in sporting events is fantastic for OPPO to convey the mutually inspirational spirit and communicate OPPO’s technology innovation experience with our global users,” announced William Liu, OPPO’s Vice President and President of Global Marketing.

The finalists were chosen from among the tennis players competing at The Championships this year by a panel of Wimbledon’s broadcast correspondents. Carlos Alcaraz, the eventual winner, was up for the OPPO Breakthrough Inspiration Award for 2022 along with Jannik Sinner, Tatjana Maria, and Harmony Tan. On 8 July, fans from all over the world had the chance to cast their votes for the tennis player who had most inspired them during the competition.

A core value of OPPO is creating new ground and encouraging people worldwide. By honouring the tennis players who embody these qualities, the OPPO Breakthrough Inspiration Award serves as an example of this philosophy. The Wimbledon Centre Court’s unique 100-year legacy, which has made it one of the greatest sporting events in the world, must be continued by inspiring future tennis stars.