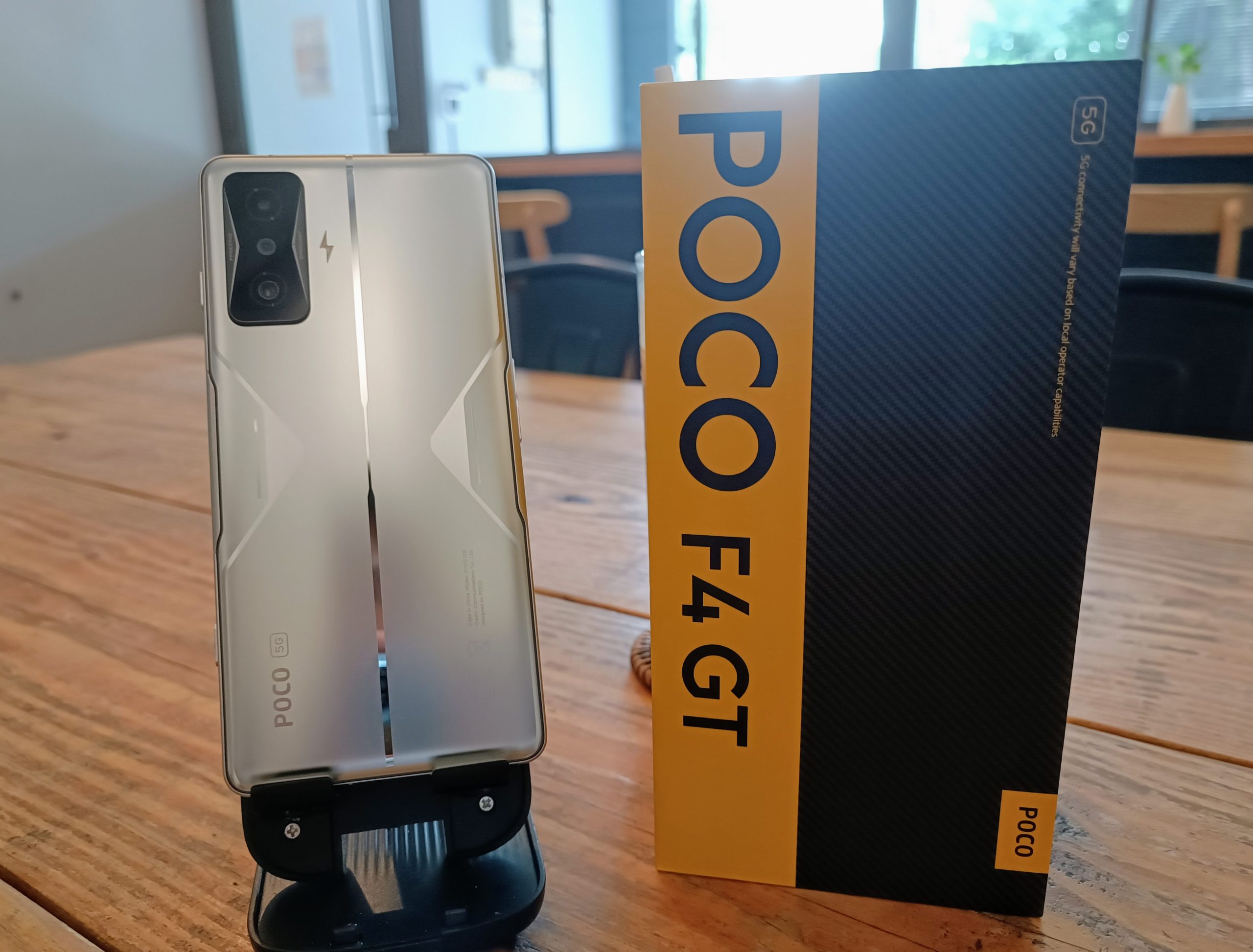 A powerful gaming phone that suits your daily tasks too

Our generation does enjoy much of the advancements of mobile gaming today, especially when we talk about smartphones, there is only few that trying to put the nearest experience when it comes to gaming smartphones for the mass market. All of these not mention needed much combined power, performance and design to keep things attractive and lasts long on battery life.

Today we will look at the POCO F4 GT in this review, POCO’s latest phone which brings gaming with the latest Qualcomm SOC in the phone.

If you are familiar with the design its dejavu to you, the design was actually based on the China exclusive Redmi K50 Gaming Smartphone which is being launched only at that region. Among that this device is measured at 8.5mm thickness which makes it a standard, but slightly longer candybar form factor to be held on your hands without much issues. The back of the phones gives the vibes of a roaring gaming aesthetic phone to be looked at and admired, especially towards enthusiast and gamers alike. Furthermore holding is comfortable for more than an hour which everyone would appreciate although it is weighted at 210 grams, which is still abit on the heavy side.

The camera portion is an island of small bump consisting of 3 camera sensors and a flash with silver color accent surrounding it. While we it is not the slimmest of all, for a gaming oriented phone, it is definitely a phone that shines up when place on any surface.

Continuing towards the sides of the phone, on the right hand side, there is a power button, while on both far sides, you will have switches to enable the physical trigger buttons for gaming and setting up certain commands and actions. On the left sides, you have a pair of volume buttons, SIM card slot and a microphone. Over at the top you will get a speaker, noise cancelling microphone and IR blaster and finally towards the bottom you get a speaker, microphone and USB C port for data and charging your phone. The back portion of the phone is constructed with glass while the sides of the body is built on aluminum material. Surrounding the rear camera, there is 2 strips of LED light that is used to indicate notification, calls and charging status.

The POCO F4 GT comes in three colors, Stealth Black, Knight Silver and Cyber Yellow, and the unit that we reviewed today is the Knight Silver which is appealing in any environment that you go to, whether its work or play.

Over to the display and audio portion, the POCO F4 GT is powered by a 6.67 Inch QHD+ 120Hz AMOLED screen with Gorilla Glass Victus and 480hz touch sampling rate. Display is vibrant on colors with great contrast level that look amazing with HDR10+ support which also carries a density of 440PPI. Most of the applications do take advantage of high refresh rates with rising of many games adapting it as well. Brightness is well tuned and can be used on all environments, including bright places thanks to the inclusion of automated PWM dimming and sunlight mode. Streaming will not be an issue as well especially if you love 60FPS HDR video enjoyment combined with a pair of stereo speakers that is quite loud and it does support Dolby Atmos out of the box and proper Full HD certification to be used on apps such as Netflix with Hi-Res Audio Certification.

When it comes to the camera portion, the POCO F4 GT rear camera consists of one Sony IMX686 64MP Wide PDAF lens, one 8MP ultra-wide camera, and one 2MP Macro lens followed by a Single LED tone flash. Pictures taken were clear as crystal during day with good amount of light captured produced on each picture in most environments. During night shots, it is pretty decent as well with slight noises and sometimes may exhibit colors accuracy abit off and may require some re-focusing to get things right, but we believe that can be optimized and updated via software. The selfie images are bright and good during day time as well which is powered by a 20MP HDR lens.

Different modes are tested with sets of 10x zoom, normal, 64MP, HDR and automatic shots taken with minimal noise so far. Other modes such as movie effects, long exposure are also available and these features are carried over from the previous Xiaomi 11 series of lineups with a mix of modern updates from MIUI 13 and Xiaomi 12 series.

Performance wise, the POCO F4 GT is powered by the flagship premium Qualcomm 4nm Snapdragon 8 Gen 1 5G Octa Core Processor, 128/256GB of internal storage and 8/12GB RAM. So if you need more space for storing files or games, we would recommend the 256GB storage variant as it lacks of MicroSD card expandable slot, or just store it via any of your favorite cloud services.

Operating system is on Android 12 with the brand new MIUI 13 on top that brings in improvement on battery life, performance tweaks, new camera enhancements and a new Game Turbo mode with performance tweaks, sound changer and monitoring profiles. The phone does come with 5G connectivity support if you are looking for a 5G phone with WiFi 6, Bluetooth 5 and NFC. Testing over WiFi 6 connection gets up to an average of 1800MBPS transfer speeds, ensuring good fast speed for multimedia, streaming and online gaming. If you have a WiFi 5/6 router, you will be able to make use of the hardware features without issues.

Over to the gaming side, basically this phone will perform well on games such as Mobile Legends, Genshin Impact and Call Of Duty with medium to high settings applied. While the two triggers can be used as a button controller mapping for almost all of the games such as Genshin Impact and Asphalt 9. Apart from that you can also assign the presses towards your favorite apps and command actions when not in game.

As expected from a flagship Android SOC, the Benchmark performance, which delivers a very good scores on each of the test between its graphics, and processor performance. The POCO F4 GT is definitely one of the phone candidate for those seeking for a top of the line flagship phones without spending too much. POCO F4 GT does cool down fast with its 4860mm² dual chamber extra-large VC POCO’s LiquidCool 3 technology to keep the phone from throttling.

Battery performance wise, you will get around a whole day of it with the built in 4700mAH battery, a mix of calls, surfing, email, streaming, and a few game matches. Turning on the battery saving mode under 20% will get you around extra 3 hours of conservative usage. The POCO F4 GT comes with a 120W turbo fast charger, which will charge up the phone to 100% from 10% in around 20min average thanks to the split battery cells, which makes charging faster while keeping the battery cycles longer and reliable over time.

The POCO F4 GT is a phone that packs serious for gamers, a good design esthetics that does not waste space by implementing a pair of physical trigger that is responsive during app and game triggers and suitable in any tasks given to push the phone’s performance close over working hours. We would recommend those who wanted a flagship featured phone without breaking the bank to fulfill all your entertainment needs. And if you are a heavy user, the included 120w fast charger can fill up till full in less than 25 minutes, and you can use it for the rest of the day.