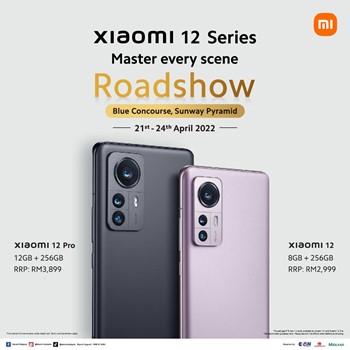 Xiaomi, a global technology leader, has launched the Xiaomi 12 Series Roadshow in Malaysia. When customers purchase selected Xiaomi smartphones at the roadshow, they will get special offers and free gifts. In addition, Xiaomi will open 25 new Xiaomi Authorized Stores across Malaysia on 23 April with an exclusive one-day Grand Opening Promotion.

The Xiaomi 12 Series Roadshow will take place at Sunway Pyramid from 21 to 24 April. Shoppers can get special deals on their favorite Xiaomi smartphones, including free gifts*, at special prices. Furthermore, when purchasing a Xiaomi 12 Series smartphone, shoppers will be able to take home a FREE Mi TV P1 43′′ or Xiaomi Watch S1 as well as other free gifts, on a first-come, first-served basis, while stocks last.

Check out the list of Xiaomi 12 Series Roadshow Deals* below:

Don’t worry if you can’t make it to the roadshow. Xiaomi is delighted to announce the launch of 25 new authorised stores in Malaysia. Enjoy the Grand Opening Promotions and get amazing deals and discounts on Xiaomi 12 Series and selected smart AIoT products at these new Xiaomi Authorized Stores on 23rd April. Below is the list of participating new Xiaomi Authorized Stores:

Stay tuned to Xiaomi’s Facebook page for the latest news, updates and promotions.