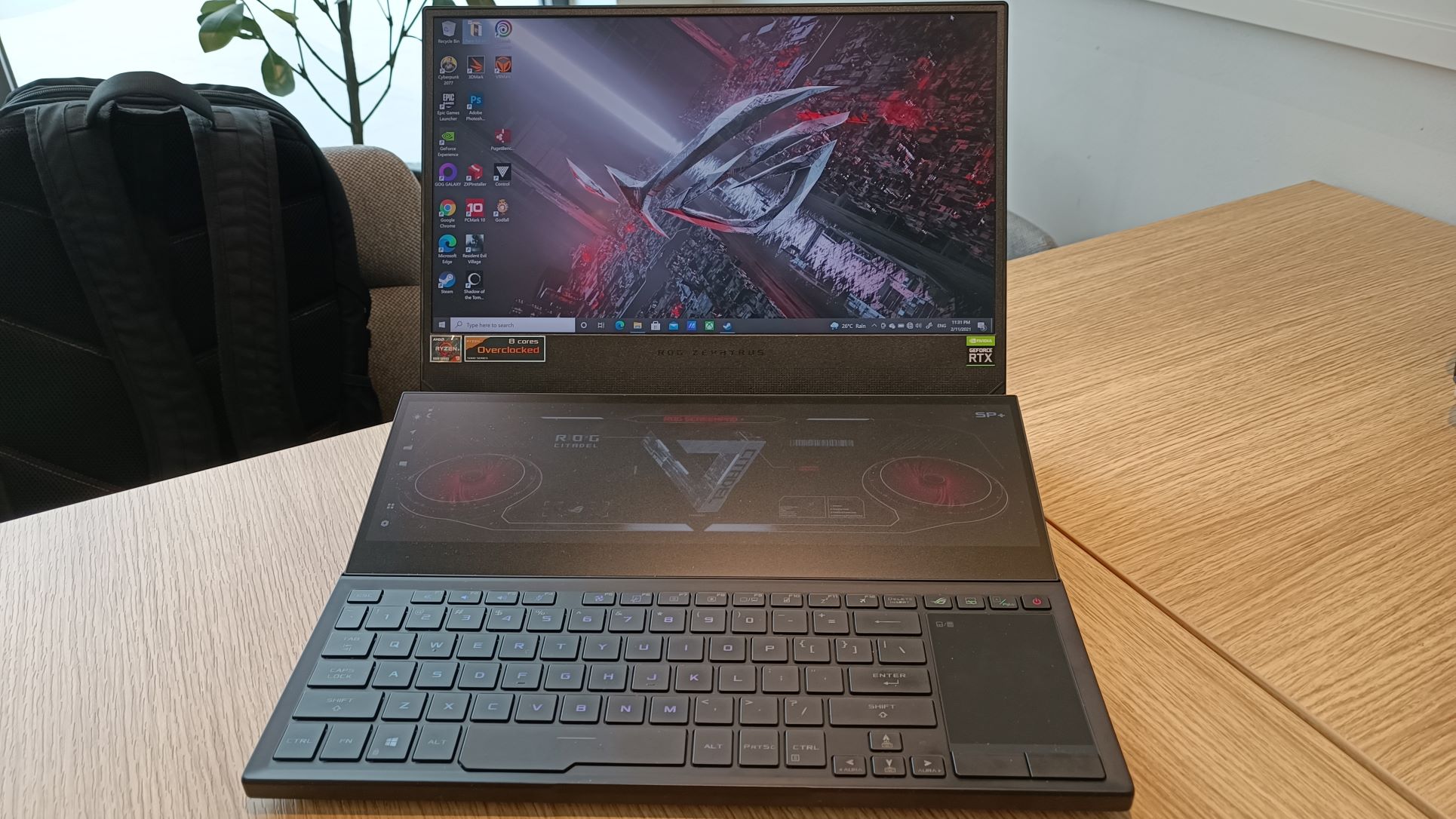 Total power for the gamers.

Laptop has been around our lives since the days where humans need to move around, and the gaming segment is proven to be an important category where a person can game, whether portable, or even in towards someone needing something as a desktop replacement. We will look at the ASUS ROG Zephyrus Duo 15 GX551, which is part of the ASUS lineup of the ROG gaming series.

The Zephyrus Duo series does have a few variants/SKU. Specifically what we are reviewing here today comes with the AMD Ryzen 9 processor with 32GB of RAM.

The ASUS ROG Zephyrus Duo 15 design focuses on its gamers hybrid enthusiast needs outlook with features in it, which is all about what do you need most for gaming use. The body of the laptop is mostly made up of plastic over the exterior while the lid cover is made of aluminum. The whole laptop weighs 2.48KG with smooth texture touch all around the laptop with no fancy design surrounding it.

Over to the hinge part of the laptop, ASUS ROG Zephyrus Duo 15 lifts up as usual but the special part of it its the ScreenPad Plus will lift up as well giving a slight up angle to improve airflow, revealing up the pair of speakers and ease of use with the ScreenPad operations. Overall airflow seems to be OK although if you experience heat surrounding the laptop, I will take it as a normal situation and its a powerful laptop afterall

The keyboard is comfortable enough for your everyday typing and the layout is done quite well as long the RGB backlight is turned on.. Overall usage with document authoring, gaming and editing is good combining with its keyboard that does have RGB Aura backlight, you can game and work in a slightly darker environment

Over to the trackpad, It is located at the far right of the keyboard, which is slightly smaller and due to its odd position, you will need some time to get used to it. It does support Windows Precision Drivers which means that all Windows 10 trackpad gestures and navigation is properly supported. Additionally you can switch the touchpad as a NumPad if alternatively you have attached your favorite mouse to it.

The ASUS ROG Zephyrus Duo 15 has 2 displays, the main screen is the 15.6 inch 4K display which carries a refresh rate up to 120Hz, and its Pantone Validated, giving it colour accurate display when working with apps such as Adobe Photoshop while on the gaming side, it has a blazing 3ms response time. The secondary display below, known as the ScreenPad Plus expand the productivity use with compatibility for most Adobe products, giving it an ultimate flexibility for extended features such as quick zoom, pan, tilt by just touching and interacting with ScreenPad Plus.

The ASUS ROG Zephyrus Duo 15 comes with two chargers, a standard supplied 280W charger which is real heavy and intended for heavy usage and provides faster charging. The second charger which is a Type C, 100W charger that is meant for scenario over normal editing and authoring use, which still charge your laptop while you work, but it is best to set it as normal profile while using the 100W charger. Based on simple charging test, the 280W charger is be able to charge from 10% to 100 % around 3 hours on average. Usage wise, from normal usage perspective, it can easily last up to 5 hours average as long you are not gaming, and purely rely on the Radeon Graphics APU

The ASUS ROG Zephyrus Duo 15 does a remarkable job in the thermal department, hovering around 49 degree celsius in a normal temperature room while working on documents with close to no noises over the fan heatsink giving it a pleasure working with the laptop. Even on heavy load such as gaming, encoding, heaving graphic intensive task, noise is expected as the fan will speed up and working its best to dissipate the heat away.

The ROG Zephyrus Duo 15 features the AMD Ryzen 9 5900HX processor with Nvidia GeForce 3080 graphics, up to 32GB of system RAM and up to 2TB of NVME storage. Below are the benchmark results.

During benchmark we observed that the temperature rose up to about 87 degree Celsius peak but it dissipates quite fast after that to its idle temperatures. Overall scores are comparable with most of the modern current desktops and it does in a remarkable fashion.

Being a gaming performance laptop, all of the games that we tested reaches well above 80FPS and ESports title is not an issue at all which be able to go beyond 120FPS. We would expect any neat future game titles are capable to run on this laptop without a sweat.

Over general performance, from Microsoft Office to web browsing, it works pretty well and is satisfying. Over to streaming, you can stream up to 4K without issues encountered.

With its starting retail price of RM12999 as of the time of this writing, we can recommend this laptop for those who want something that caters everything in a laptop, and by we meant, Gaming, steaming, working, editing, encoding, authoring, any heavy rendering, this laptop can take it remarkably. It is a good choice for content creators as well thanks to the ScreenPlus Pad display which you can use it as your extended functional controls over compatible applications.

Special thanks to Asus for loaning us the product to review

For more information on the ROG Zephyrus Duo 15 , click here