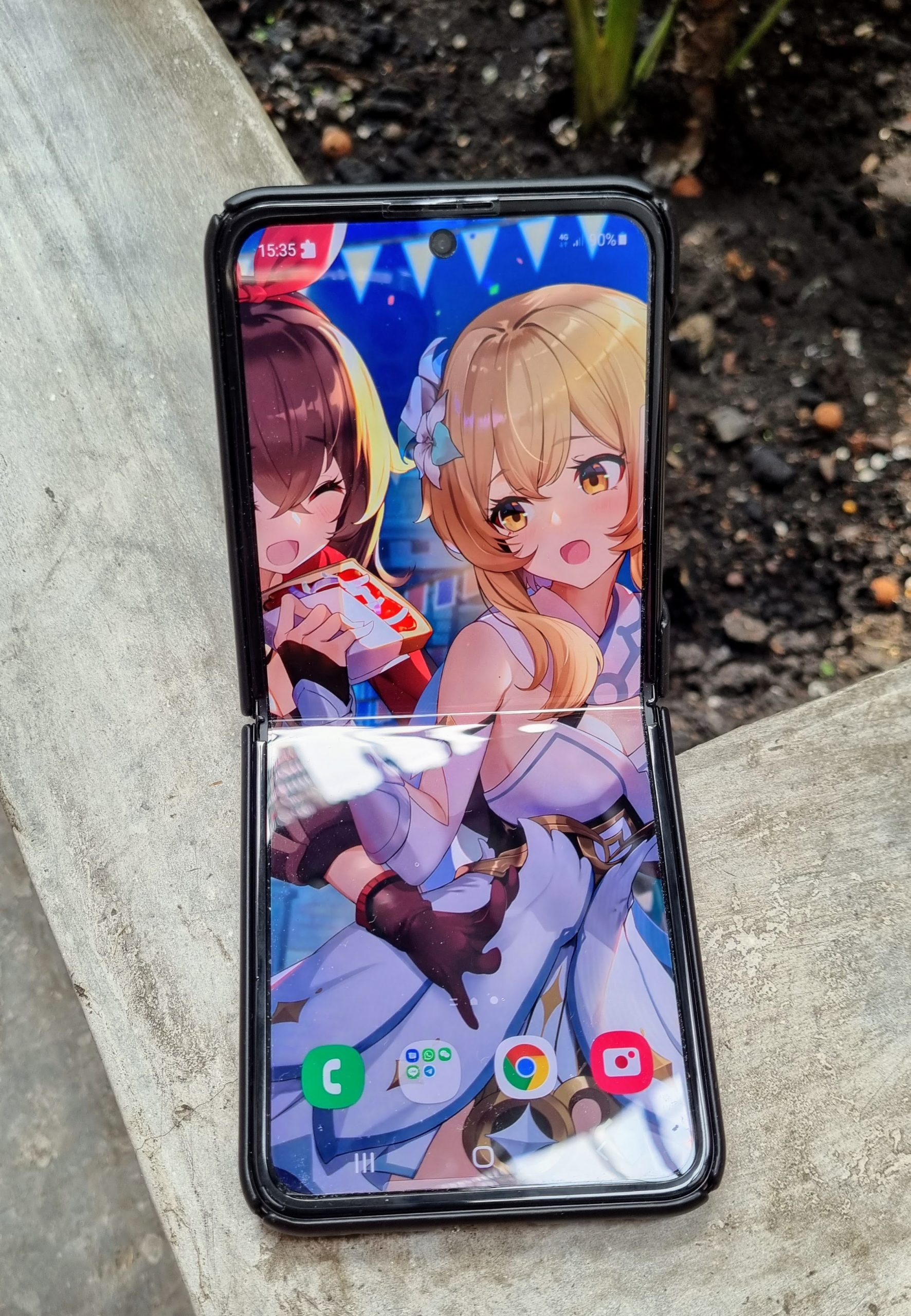 Flipping the phone gets even better

Samsung is a company known to have release their flip form factor phone during its conventional feature phone era, however Samsung has been an innovative company over the years, trying to experiment and releasing different kinds of phone with different form factors, even during the days of feature phones with unique designs. Our focus will be on Flip or Folding phones from Samsung in this article.

The Samsung Galaxy Z Flip3 5G is the third iteration/generation of the Fold Series lineup, and honestly the Z Flip2 is already an innovation when it comes to the durability that comes with specifications that still holds till this day. As a starter, the Z Flip3 comes with just one SOC variant at the moment of this review, which is the Snapdragon 888 SOC, no known other SOC variant so far and I think it’s just great to just stick to one variant instead of splitting it differently according to region. Let’s dive into the review of the Z Flip3 5G, which is the third generation of the Flip series that really gives much more functionality that may mark the return of a better foldable flip smartphone.

The Galaxy Z Flip3 5G is built with a solid aluminum from back to its surrounding sides, while the front is plastic. The front of the device you will spot a Super AMOLED Cover Display measured at 1.9 inch in size protected by the Gorilla Glass Victus. The Cover Display is not just for show, you can interact with it by double tapping and swiping, revealing Android notifications, and certain Samsung Apps such as Samsung Health.

Flipping up the phone reveals the full, tall 6.7 inch Dynamic AMOLED 2X display which in fact, is a classic feeling of flipping up but it is indeed a fully featured Android smartphone. Hinge is very steady, stable. Constantly flipping up the phone has no squeaks or any sorts of weird mechanical noises. You can either flip it entirely or just half sitting on the table, which Samsung carefully engineered this part to ensure it sits nicely over any flat surfaces. The crease in the middle of the plastic screen material after flipping it for a few times does show, but almost unnoticeable whether it is under bright light in nature or in the room.

Overall material is matte therefore no worries on the fingerprint stains or fingerprint magnet. On the camera side, the ZFlip 3 has two rear cameras with flash beside the Cover Display and another selfie camera when the phone is flipped up.

The Galaxy Z Flip3 5G comes in three colors, Phantom Black, Cream, Green, Lavender, Gray, Pink and White. The one that we got for the review is the Phantom Black

Continuing over to the top of the phone, there is one microphone, while on the bottom there is a speaker, one USB C port and two microphones. Towards the left side is the SIM card slot, while on the right side there is a Volume rocker and the power button, which also combo as a fingerprint scanner. No headphone jack, but it’s easy these days to get an USB C headphone, Bluetooth headset or just get a USB C to 3.5mm audio jack.

Over to the main display portion, the Galaxy Z Flip3 5G is powered by a 6.7 Inch Dynamic AMOLED 2X 120Hz screen that supports HDR10+. Over to the screen beside the camera when folded, also known as the Cover Screen, it is measured at 1.9 inch which is also an AMOLED panel.

The quality of the screen is very well represented with dynamic brightness adjusted automatically based on the light conditions surrounding when operating with the phone. The advantage of the main screen is the 120Hz screen that gives a very smooth transition and response needed whether you are surfing the web, playing a few games or just creating a few posts over social media. Apps or games that can display and operate over 60FPS and above are compatible with the Z Flip3 5G. Resolution of the screen is running at 1080 x 2640, which is quite packed with quality and clarity combined when streaming videos via YouTube

Over to the Cover Screen, it’s main function is to display notification, use it as an extended viewfinder with the rear camera, weather notification, quick sound/voice recording, schedules, clock/date and integration with Samsung Apps. All of the functionality of the Cover Screen is customizable via the phone settings.

The Galaxy Z Flip3 5G has a total of two rear cameras and one selfie camera. The rear camera consists of one 12MP wide lens with OIS and another with a 12MP ultrawide lens. Picture quality is well represented with good quality of color accuracy with fair contrasts, night or darker shots are not bad too, as long the conditions are not too dark, it can still pick up most of the details. Zooms from the camera are up to 10X digital. Other modes such as portrait, single take, AR mode , Pro and Panorama are available too. The pair of rear cameras can record videos at 1080P and 4K quality with a choice of 30FPS or 60FPS with HDR+. Stabilization works fairly well while recording overall with the exception of 4K resolution where you will have to keep your hands real steady while recording, or just alternatively attach a gimbal on it.

Specifications wise, under the hood, the Samsung Galaxy Z Flip3 5G is powered by the Qualcomm Snapdragon 888, with the choice of 128GB or 256GB of internal storage and 8GB RAM. Call quality is excellent over VOLTE, WoWIFI option is available as well when enabled, delivering crystal clear voice quality. 5G is getting near and will be launching soon within the Asia regions, so this device is ready for it when your Carrier launches it within your area. The Z Flip3 5G also has WIFI 6e connectivity, which will give superb experience when connected to a WIFI 6e compatible router, delivering blazing speed connectivity for all your productivity and streaming needs. Other features such as Bluetooth 5.0, NFC is present as well making connections over to your earbuds is quick and payment can be tapped with its certified NFC chip for Visa and MasterCard.

Over to the gaming side, we tested on Genshin Impact, COD Mobile, Mario Kart and PUBG Mobile. All the games perform fairly well over medium settings and framerates are over 57FPS by average. It’s no stranger as the Qualcomm Snapdragon 888 can just handle it easily. So for games that supports over 60FPS such as Temple Run 2, the Z Flip3 will definitely runs well with it.

Benchmark wise, it’s a Snapdragon 888 flagship SOC that ensures it gets all of your multitasking running. While it is just a synthetic score, it’s clear that if you needed an upgrade, this phone could be for you, and it does get the job done fast and efficient.

Battery performance wise, you will get around 9.5 hours of it, a mix of calls, surfing, email, streaming, and a few Mobile Legends matches. Turning on the battery saving mode under 20% will get you around extra 2 hours of conservative usage. The ZFlip3 5G does not come with a charger, but you can always get any third party compatible PD charger. A 15w charger will charge up the phone in about 2 hours from empty to 100%.

The Samsung Galaxy Z Flip3 5G is a phone where a user needed a device that is trendy, modern, fun, yet powerful, practical, reliable and compact for all day use. This device is suitable for those who are Vlogging on the go, with constant social media posting and a camera that does quality shots with constant work life balance lifestyle, this could be the phone just for you. Although it lacks of Samsung specific advance feature such as DeX, but during my usage for two weeks, I realize that there is other ways I can sync up by files also via cloud or just by simply connecting the Flip to the PC via USB cable, moreover with the available fast Data and WiFi 6e connection, the Z Flip3 5G is really a Flip phone that combines the art of beauty and style.